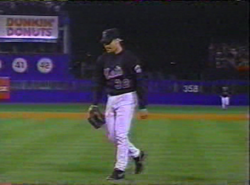 Over the weekend, oft-injured southpaw Mike Hampton announced his retirement from baseball. He was remembered primarily as a punchline in recent years, when remembered at all, thanks to the endless series of ailments that befell him. Hampton was also mocked for signing a ridiculous free agent contract with the Rockies following the 2000 season, then saying that the school system was what drew him to Denver.

Lost in these dismissals are the qualities that earned him that huge contract in the first place, and why Mets fans should perhaps remember more fondly than they do.

After flashing some promise in his first few years in the bigs, Hampton finally put it all together in 1999, going 22-4 with a 2.90 ERA for the Astros. He was not a flamethrower or a strikeout artist, but he was a crafty lefty with good control. The Mets, coming off an exciting but ultimately heartbreaking season, needed to bolster their starting rotation. With free agency looming for Hampton, the Mets acquired him from Houston for Roger Cedeno and Octavio Dotel (Derek Bell came back in the deal as well).

It was hoped that Hampton and Leiter would be Aces 1A and 1B in the Mets' rotation, but it didn't quite work out that way, at least not initially. Hampton had an up-and-down regular season, winning 15 games but struggling with his control at times, a flaw that had not been part of his M.O. prior to coming to New York. His first start for the Mets came in unusual circumstances: the first regular season contest played in Japan. In the Tokyo Dome's unfamiliar environment, Hampton walked nine batters en route to a 5-3 loss.

His unwillingness to discuss an extension with the Mets in season, coupled with less-than-ace performances, led many to think he was not suited for the bright lights of the big city. That opinion was not altered when he did poorly in his first playoff assignment as a Met, a 5-1 loss in game one of the division series against the Giants.

Despite this, Bobby Valentine went with Hampton to start game one of the NLCS in St. Louis, rather than the more experienced Leiter. Hampton got into trouble early, loading the bases in the first inning, but recovered to keep the Cardinals off the board. The entire game, he allowed baserunners, but did a masterful job of stranding them. At night's end, he had 7 shutout innings under his belt, and the Mets had a 1-0 series lead.

That put Hampton in a position to pitch the clinching game five. Before the game, he declared "I'm looking forward to pitching the game of my life." He was true to his word. As Mets batters walked all over Cards' starter Pat Hentgen and Shea Stadium literally shook, Hampton scattered three hits, struck out eight, and went the distance in a 7-0 coronation. Hampton was hoisted above the mound by his teammates, and later shortly thereafter voted the NLCS MVP.

Unfortunately for him, he did not stay in fans' good graces for long. He was knocked around by Yankees hitters in game two of the World Series (not that anyone noticed, thanks to Roger Clemens' bat chucking). In the ensuing offseason, he ended months of speculation by signing an eight-year, $121 million contract with Colorado, a figure that not even Steve Phillips could out-stupid. His "school system" remarks were the icing on the cake for Mets fans, and he quickly went from being a hero to entering a realm of villainy reserved for the likes of Clemens and Chipper Jones.

I'm among those who cursed his name more than once when he left for the Rockies. But in retrospect, this seems unfair. Who among us would turn down Hampton-level cash if it was laid before us? As for the "school system" speech, I'm sure the poor guy was coached by his agent and/or the Rockies. A dumb thing to say? Maybe, but I can't expect athletes to be smart.

The bottom line is, the Mets don't make it to the World Series in 2000 without Hampton. He deserves a little more recognition for that than he's received. And so on this occasion, I can wish him a happy retirement, and thank him for the events of October 16, 2000.