Also: What I Want Out Of This Season

Turn the clock back about two and a half years. The Mets, after a mediocre start to their 2008 season, had managed to build a small lead at the top of the NL East standings. But they are seemingly in the middle of another (albeit much less epic) collapse after the disastrous ending the previous year. Mets fans, including myself, can't imagine having to endure the same heartbreak again yet also feel a sense of inevitable doom.

I remember hearing about the decision to pitch Johan Santana on three days' rest in the second-to-last game of the season and feeling everything was over right there. Taking the one great pitcher in the rotation and forcing him to pitch on short rest when you're going to end up pitching Oliver Perez in the final game anyway didn't sit right with me. Granted, Oliver Perez wasn't the worthless pitcher he became once he signed a 3-year, $36 million contract, but he was no better than average in 2008. On top of that, down the stretch he had been strikingly awful. He had just given up five runs in his previous start and going right back to him on three days' rest was the best course of action? I can't honestly say I remember which pitcher would have started the penultimate game instead of Johan, but I felt any downside would be mitigated by giving Johan normal rest.

Boy, was I wrong.

At the time, I was in my first job out of college — a job I might have gotten due to sharing Mets fandom with the boss — and we had a suite rented out for that very game. As apprehensive as I was about Johan, how could I not be excited to be in a luxury box for the first time in my life, even if it was the very last one in right field? Little did I know I wouldn't get out of my seat past the fourth inning, making sure I had a good seat to witness the dominance. I watched as the Mets $137.5 million offseason acquisition put up zero after zero, managing to do more than anyone could have expected. I kept wondering if Jerry Manuel would pull him, ready to flip out if another pitcher walked out to the mound in the beginning of the 8th or 9th inning. I didn't care about his ballooning pitch count; apparently, neither did they.

I have always remembered one at-bat in particular, and I was worried that going to BrooksBaseball.net to look it up would prove my memory incorrect. In the 9th, Dan Uggla stepped up to the plate with 1 out and a man on second. Josh Willingham had just hit a double, but Jerry was leaving Johan in. He had been the best pitcher in baseball in the second half and it was his game — and season — to lose.

The crowd had been on its feet from the beginning of the inning, and numerous suite denizens were bashing the advertising sign directly below their seats at this point. On the first offering, Uggla swung and missed at a changeup right down the pipe. Incredible. Johan followed that up with the same pitch and Uggla swung through it yet again. Hilariously awesome. On the 0-2 count, he threw yet another changeup, this time in the dirt. Uggla swung and missed the ball by a foot. Outside of Games 6 and 7 twenty-five years ago, I'm not sure Shea was ever louder than it was after that strikeout.

Here's the at-bat in PitchFX form: 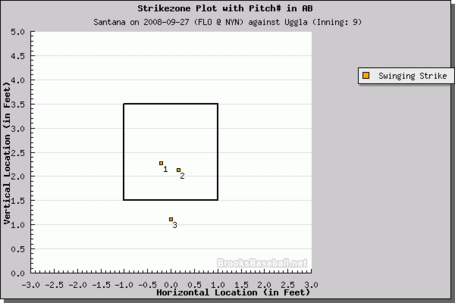 The Mets were really going to win this game. We all knew it. Johan wouldn't be stopped. A starting pitcher who's only out on the field every fifth day shouldn't be able to put an entire team on his shoulders and take them to the playoffs, but here we were watching it happen. And we didn't find out until later that he carried the load with only one functional knee.

When the next hitter drove a fly ball almost the warning track, I think the entire stadium missed a breath. But when it was caught, it was pandemonium. Everyone in that moment didn't care that Oliver Perez was slated as the starting pitcher the next day. I went home and immediately looked on StubHub for tickets to the last game at Shea — I was that excited and optimistic. The possibility of having front-row seats to the final depressing game in such an awful stadium did not enter my mind. Of course, once I saw the prices, I quickly came to my senses, but the point still stands: the Mets were faced with what was practically an elimination game with Oliver Perez on the mound, and I couldn't wait to watch. That was the effect of Johan Santana for that one day. I also still believed David Wright and Jose Reyes had it in them to come through in that last game; I knew they'd be able to overcome whatever deficit Ollie left them with. Carlos Beltran's legs were still under him, and Carlos Delgado had put together a monster second half. There was still confidence left on a very basic level. The Mets were a damn good team. They wouldn't let the Marlins end their season yet again.

I think we know the story since then. I don't need to delve into the hell that was 2009 nor do I have to go over some of the awful acquisitions. Sure, I started to think the Mets had a legit shot at the All-Star Break last season, but the quick fall to start off the second half brought me back down to earth in a hurry.

The current narrative is Sandy Alderson and his all-star front office. As a proponent of sabermetrics, I have no doubt that he'll right the ship, as he has already started to do. But as much as I trust the guys now running the show, I want to have the same confidence in the guys on the field. And right now, how could anyone? There's the injury questions for Beltran and Bay. There's Wright's schizophrenic hitting, and Reyes' leg and OBP issues. Johan Santana, the man who once inspired so much confidence, might not even pitch this season.

But you can still have excitement without confidence. I can't wait to see if Ike Davis can mash taters at an even higher rate, and to find out whether or not Brad Emaus is for real. I want to see Josh Thole develop into a solid backstop the Mets can depend on for years, and watch Jon Niese grow into the reliable workhorse we all want him to be. And I pray everyday that Bobby Parnell will take the closing job away from Francisco Rodriguez solely on merit. There's plenty to look forward to this season — just most likely not a playoff race.

My hope for 2011 is that by the end of year, the state of the Mets will be easier to quantify and that the subsequent offseason will be that much better as a result. If Reyes' fate is to be traded for prospects, and Ruben Tejada needs to take his place, then so be it. If Chrises Young and Capuano don't work out, it's not like the Mets have huge albatrosses to deal with going forward. All I ask for is a couple of things to go right, like Fernando Martinez or Reese Havens staying healthy for a whole year, or David Wright reverting back to the hitter he was pre-2009 — anything to keep me excited about the future, because that's what this season is about. It may not be a rebuilding year in the traditional sense, but it's no doubt a transitional and evaluational year.

Like I mentioned, I have confidence in the front office to do what's right. I just can't wait to feel the same way about the on-field product again.