Keeping Score of the Mets

Share All sharing options for: Keeping Score of the Mets 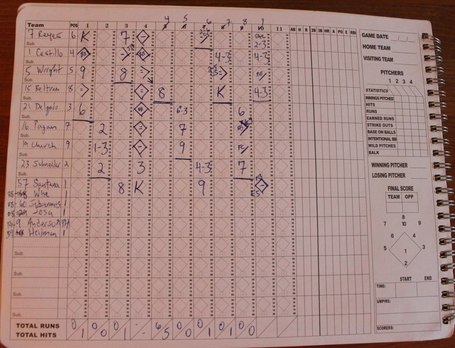 My scorebook, Opening Day 2008 in Florida, Johan Santana's first game with the Mets.

When the Mets acquired Doug Mientkiewicz a few years back, I had already memorized the rather crazy spelling of his last name. Mientkiewicz played for the New Britain Rock Cats, the Twins' Double-A affiliate, in 1997 and 1998, and New Britain was the city in which I learned how to keep score. My dad started teaching me when I was six, back when the team was affiliated with the Red Sox and fittingly named the New Britain Red Sox. I remember other fans at those games asking my dad if I was actually keeping score. I most definitely was. And I was hooked.

I've continued scoring baseball games ever since. I wrote M-i-e-n-t-k-i-e-w-i-c-z in my Rock Cats scorebook so many times that, despite his obvious shortcomings as a player, I was excited when the Mets brought in their new non-Carlos Delgado first baseman. When I graduated from college in 2006 and could finally afford more than a few Mets tickets, I picked up my own scorebook before the season instead of using the scorecard in the program sold at the stadium. I've done so every year since and this year upgraded to a new book. Keeping score is a vital part of my in-stadium experience.

Scorekeeping is often referred to as a lost art, but there still seems to be plenty of enthusiasm about it. Pitchers and Poets had "Scorekeeping Week" in early March. There's a vintage-looking scorebook project going on over at the Eephus League. For those whose lives are moving more and more in the paperless direction, there are iPhone and iPad apps for keeping score, too. Though keeping score may be relatively rare, those of us who care about it are a passionate bunch.

This season, I plan to write a series of posts on the subject as it pertains to the Mets.The goal is to talk to people about the aspects of keeping score: the scorebook, the method of keeping score, why they do it, and anything else about it that might be unique. Is this something that's of interest to you? If so, any suggestions on what you'd like to see from these posts? Last but not least, do you keep score at Mets games?