Let's Go to the Audiotape: Mets Double Down

Share All sharing options for: Let's Go to the Audiotape: Mets Double Down 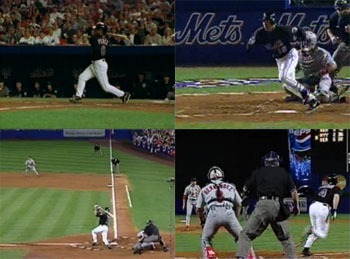 When I undertook my 2000 season retrospective, there were a few games that were rough to watch again (you can probably guess which ones), but for the most part, I was happy to rediscover so many great moments. One in particular: game 4 of the NLCS against the Cardinals.

This game hasn't entered baseball lore, nor should it, really. Like much of that series, it was not the prettiest game of baseball every played. But I did witness it in person along with my mom, a huge Mets fan, so it will always have a special place in my heart.

It was the first playoff game she'd ever been to; the closest she'd ever gotten was a ticket stub from game 5 of the 1969 World Series, gifted to her by a friend who got to go. This friend was an Orioles fan, so he had no issue with giving up the memento. Before the game, I recall my mom expressing rare over-confidence. Normally she sees doom in the team's every move, but on this occasion she lamented the fact that the Mets lost game three, "because now we can't watch them sweep."

She wasn't the only one. When the Mets fell behind early on a Jim Edmonds two-run homer in the top of the first, the crowd barely flinched. It's hard to explain if you weren't at Shea at that moment, but there just seemed to be a feeling in the air, a knowledge that a pennant was a foregone conclusion.

Darryl Kile was tasked with getting the Cardinals back in the series. Tony LaRussa asked him to throw on short rest, hoping that would enable him to start game 7 if the series got that far. Due to injuries and the epic implosion of Rick Ankiel, this was the best of several bad options. But the Mets immediately made it look like a poor decision.

Timo Perez led off with a ground rule double down the right field line. Edgardo Alfonzo followed with an opposite field double, easily scoring Timo and cutting the Cards' lead in half. Mike Piazza then clubbed his own double just over J.D. Drew's glove in right. Alfonzo held up, thinking the ball might be caught, and could only go as far as third. But both he and Piazza soon scored when Robin Ventura tattooed a ball to right center, missing a home run by inches.

Four Met batters, four doubles, and a 2-0 deficit had turned into a 3-2 lead. The crowd was completely bezerk, and when Benny Agbayani belted a one-out double to drive in Ventura, Shea literally swayed with excitement. That made five two-baggers in one inning, a new LCS record.

It's hard to capture what it was like to be at that game in words, so I thought I'd share the radio call of that fateful bottom of the first with you. You can hear the fans' insane enthusiasm, and you can hear Gary Cohen and Bob Murphy marvel at what they are witnessing. You can not hear my mom screaming in disbelief and joy, but I assure you she was.