Share All sharing options for: Thoughts On Sideline Reporting And Kevin Burkhardt

My ideal sideline reporter rarely appears on a game broadcast. Minimalism is king -- injury updates, information directly related to the game at hand, extraordinary interviews and a pleasant demeanor are all I covet. There are plenty of outlets to cover items not pertinent to the game, including pre-game shows, programming like "Mets Weekly" and the Internet. The game is the game. Furthermore, the reporting of news is paramount to editorializing, which should be nominal at most. Just the facts, please.

Kevin Burkhardt has been the Mets' sideline reporter since 2007, succeeding Chris Cotter, who departed after the 2006 season. He might be the face of the network, given how much air time he logs both during the baseball season and in the offseason on programming like "Mets Hot Stove", the pre-game show, game broadcasts and post-game manager press conferences. SNY loves them some KB.

Burkhardt is a hard worker. I was able to observe him in action during a Mets-Nats game in DC last season, as my seats were just a few rows behind the photographer's box which Burkhardt used as home base for much of the night. When not on-air, he was constantly talking on his headset, presumably to a producer, and taking notes on what looked like a game plan. There wasn't a break to be had. Sideline reporter is a dream job, but also one that requires a good amount of preparation and execution. It was nice to see the hustle, which earned him an invitation from my party to post-game festivities at various Capitol Hill watering holes, which he declined via silence.

Moderately charismatic and affable, Burkhardt satisfies the "pleasant demeanor" sideline reporter requirement. He is also quick with an injury update or relevant anecdote from the field. However, he is overused during game broadcasts, and it detracts from the viewing experience.

Games are often interrupted for superfluous interviews. One example is interviewing a Mets player, usually a pitcher, which more-or-less turns into a shoot-the-sh** session. I recall one instance last season when KB spoke with Mike Pelfrey during a game to discuss his start the previous day. Questions included "how were you feeling on the mound yesterday?" and "were you able to command the two-seamer?" These types of Q-&-As are best reserved for pre- or post-game shows. Another example of the unnecessary interview is when KB speaks with someone in the stands, usually a minor celebrity or leader of a local organization. Again, this is best left for the pre-game or the "Mets Weekly" type shows. I could also do without interruptions to showcase the cuisine and amenities of other teams' ballparks. Basically, if Burkhardt starts calling game action during his segments, he has been on too long. (An aside: It should be noted that Burkhardt certainly does not unilaterally determine his on-air time. Programming directors and producers are a major part of sideline reporting as well.)

A game-interrupting interview is excusable in special circumstances. For example, KB spoke with Bob Feller last June when the Mets visited Jacobs Field and the Cleveland Indians. The discussion lasted nearly a full inning. Feller was 91 years-old at the time and as enlightening as ever. The game took a backseat for a few minutes. Feller passed away in late 2010, and ignoring an opportunity to speak with him would have been a mistake.

I would be remiss in this curmudgeonly rant if I didn't mention KB's Twitter exploits. He has embraced the medium, interacting with fans, even those who are critical. Some 14,000 followers read what he has to say, which can be amusing at times. AA regulars have him to thank for one of the better memes from last season, the genesis of which was this Tweet about the ‘Jenrry Mejia: starter or reliever' debate (KB was pro-MLB bullpen): 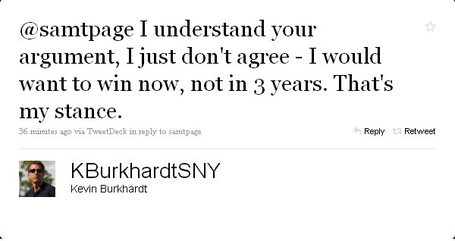 I'll be honest and say that Burkhardt's analysis leaves a little to be desired. But the same can be said about any Joe Blow with a Twitter account, myself included. And it's not really his job to provide analysis on-air, even if he does from time-to-time. The day after the Frank Rodriguez punching incident, KB played the part of street corner Armageddon preacher during the pre-game show, going on about the Mets being on the brink of internal collapse. How could they ever recover from such a destructive incident? Naturally, the Mets shut out their opponents the next two games and played about the same quality of ball the rest of the season. Not everything needs to fit within a narrative.

To sum this up in Twitter form: "I like Burkhardt, but I want less sideline reporter interruptions; that's my stance, #blamebeltran".