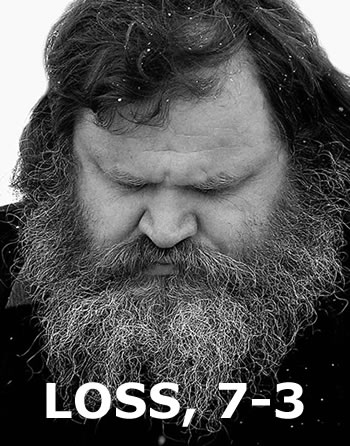 Chris Young had no batting heroics this time, but still baffled Nats hitters for 7 strong innings, giving up a lone single and inducing one futile pop-up after another. Jayson Werth was particularly victimized, fouling out behind home plate three times. Young's teammates took an early lead on first inning RBI singles from David Wright and Angel Pagan. Washington starter Jason Marquis settled in after that, keeping the Mets off balance and fanning 9. The Mets managed another run on an Ike Davis single in the fifth, then their bats went silent for the remainder of regulation.

But Young's fine work was undone by DJ Carrasco, who allowed the Nats to tie the game up in the top of the eighth on a long double, a walk, a bloop single, and an RBI groundout. Taylor Buchholz, Tim Byrdak, and Frankie Rodriguez conspired to keep the Nats off the board through the ninth, and Blaine Boyer pitched a 1-2-3 tenth, but a single, hit batsman, and opposite field hit for Pudge Rodriguez gave the Nats the lead in the top of the eleventh. One batter later, Laynce Nix put things away with a three-run homer to the Mets' bullpen

Chad Gaudin and Tyler Clippard put 5 more Ks on the Mets' ledger in three innings of work, while Drew Storen worked around a leadoff single from Jose Reyes in the tenth, and Sean Burnett set the Mets down quietly in the bottom of the eleventh to close it out. This was the craptacular sort of loss that makes you feel the weight of an afternoon wasted. On the plus side, it wasn't too sunny or warm today, so if you were one of the unfortunate ones who dedicated your day to watching this mess, you didn't miss much outside.

The story of the weekend was the bullpen's complete and utter ineffectiveness and the Mets' batters' enormous amount of strikeouts. Regarding the former, no Mets reliever seems capable of getting ahead of batters or not walking the ballpark. Jason Isringhausen's arrival from Port St. Lucie is now a question of when, not if, and the fact that the often injured ex-closer can not be considered an answer to any question shows the depths of the Mets' relief woes.

As for the strikeouts, there might be some teams with a pitching staff who can fan 17 batters in 11 innings, but the Nats don't have one. Willie Harris was particularly useless, wearing the golden sombrero on the day and showing less and less of his spring training form with each passing day.

A crummy weekend against a crummy team has sapped what little equity and patience the Mets had with fans (and the press) after their decent showing in Florida and the first game in Philadelphia. It's unfair to completely judge any team this early in the season, but expect the wolves to be out in full force tomorrow morning. If you know what's good for you, stay away from sports radio on Monday (good advice any day, really), and hope the Mets can turn the page against the Rockies tomorrow night. 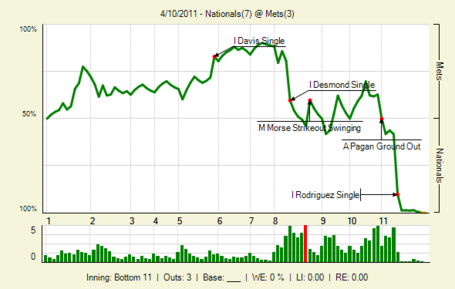 Nice job by metsman07; his effort in the game thread embiggens us all.