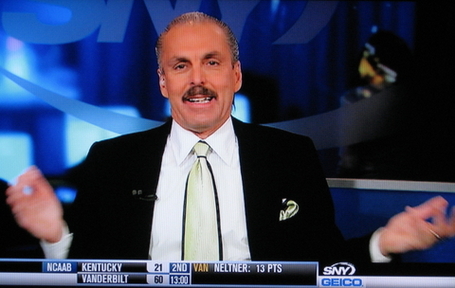 I am not only Sammy Davis Jr. and Sal Fasano rolled into one, but a wise and learned bemoaner of the fortunes of the National League New York franchise.

Completely Made-Up Quote: The Mets - oh, the pain! Any blind optimism about the 2011 season has been lost in a sea of Mike Pelfrey and Jon Niese and the rest of this god-awful rotation. What a disaster! And don't even look at the bullpen - oh god, the bullpen! RAISE THE WHITE FLAG, THROW IN THE TOWEL, TRAID THA CORE.

Scouting Report: Beningo, an avid user of Just For Men - Facial Hair but far too lazy to put it on his head, attempts to stir up the pot with starting points like "[Yankee Player X] is much better than [Mets Player Y]". My guess? He's a closeted Yankee fan. Beningo believes in extremely small sample sizes and often blows them up to the extreme. If he was living in the 1920s and was a sports commentator of some sort, he would likely have decried Ruth's 1922 season in which the Babe hit only 35 jacks and had a 182 OPS+. He would have written the Babe off as a flash in the pan. Meanwhile, he would have praised the "solid job" of washed-up Phil Douglas of the '22 Giants, who despite leading the league in ERA had 33 K's and 35 walks in 157 innings. 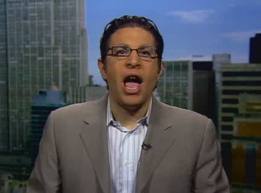 My only notable skill is being able to string words together in a coherent sentence while yelling.

Completely Made-Up Quote: "HEY CARLIN MY GUY - ROBINSON CANO. MY GOAT - DEREK JETER. LOOK AT ME I'M THE LATEST MEMBER OF THE ANTI-JETER MEDIA BANDWAGON. I JUST DON'T THINK ANY TEAM CAN MATCH THE SUCCESS OF..." (quote chopped off due to mic explosion)

Scouting Report: Schein, quite possibly the only minor member member of a regional sports cable network to have an active hate page on Facebook, has inspired 69 Vikings fans to post stuff like "WHAT A DOUCHE" on his Fanpage's wall. Other than that, Schein is mostly harmless. Be sure to wear earmuffs when going up to battle against him, lest your eardrums be shattered by Schein politely asking his wife for a glass of water. The man knows absolutely nothing about either football or baseball, but he IS the odds-on favorite to win the Nobel Prize for Yelling. This man's so loud, Harper Lee wrote a book about him. It was called "To Shrill A Mockingbird" and the main character was Shout Finch. Adam Schein is like a symphony of 100 jackhammers in unison.

If you didn't get it already, Adam Schein is loud. 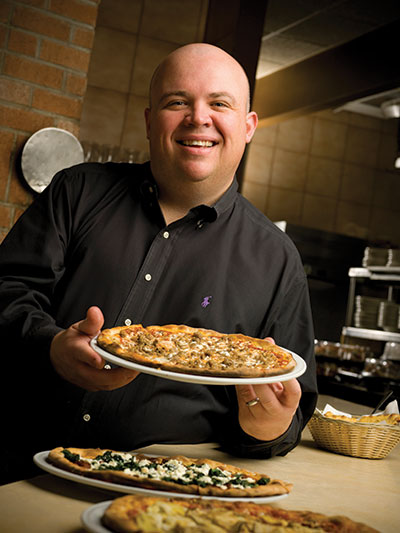 Completely Made-Up Quote: (as host of Beer Money) "No offense, Alexi Panos - you're hot and all, but that Julie Donaldson was a f***ing BABE. Too bad I ate her."

Scouting Report: Chris Carlin, who is seemingly at once on every SNY show (not a fat joke, but it could be), is also among the most annoying of all SNY personalities - simply for the fact that he has none. At least we knew where Joe Beningo stands. His Twitter is neither funny nor useful. His game-calling for Rutgers basketball and football is generic. Simply put, Chris Carlin offers no insight that Vinny from down the street couldn't offer you. And considering Vinny is a 3-year old who's watched all of 2 professional sports games, Carlin's not doing too well in that department. To make Carlin more interesting, I decree his new thing to be making infantile puns off New York sports figures names. Examples: Mike Smellfrey, Carlos Smelltran, Brett Fartner, Russell Fartin, Chin-Lung Poo, Pedro Beatoff, Joba Chamberpot, and R.A. Dickey. Carlin will laugh every time he makes one of these jokes. With any luck, he'll be fired and replaced by anyone with more personality. My unborn child could probably use some money. 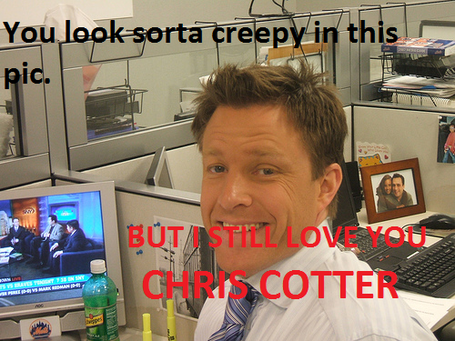 Our old, beloved sideline reporter. Though he lacked boobs, Cotter never once suggested that we turn top hitting prospect Ike Davis into a pinch hitter because pinch hitters often come up in important situations. When SNY replaced Cotter, I had hopes that they would bring in someone like this to do sideline reporting. However... 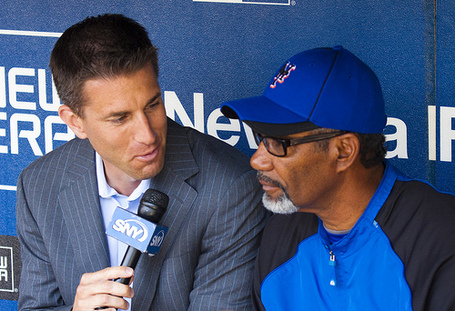 instead, we got this guy. Kevin and Jerry were undoubtedly talking about Jenrry Mejia's role as a reliever. For the first time ever, a completely made-up conversation has been fictionally transcribed between Manuel and Burkhardt.

Completely Made Up Conversation:

"So, Jerry, what are your plans for the 2010 season," asked Burkhardt.

"Well," began Manuel. "I plan to adjust Jason Bay's swing to Citi Field. Right now, he'll hit too many home runs. That doesn't play well in Citi Field because it is literally impossible to homer in there. Then I will give 187 plate appearances to Alex Cora. I will manage the rest of the season by gut alone. If David Wright does not exercise 10 hours a day and then later fails to make one play, I will chide him with the phrase "That's poor, David, that's poor."

"That sounds okay," said Burkhardt. "But what about Jenrry Mejia? You should use him as a reliever. I want to win now, not 3 years from now."

And so it was decided.

Scouting Report: According to some reports, Kevin Burkhardt is wildly underpaid. According to some, he is the Anti-Christ due to his obvious use of highlights. Remember when I said that Chris Carlin's Twitter was bad? Have you ever read KB's Twitter? The man sounds like he's on Charlie Sheen. Unfortunately, the side effects of the Sheen drug (if that's still a topical reference) have not kicked in yet. However, Burkhardt is perhaps most famous for generating the AA meme "I want to do [x] now, not [y] years from now". Personally, I want to do this now, not 3 years from now.