Share All sharing options for: Rockies 5, Mets 4: Amazins Fogged In 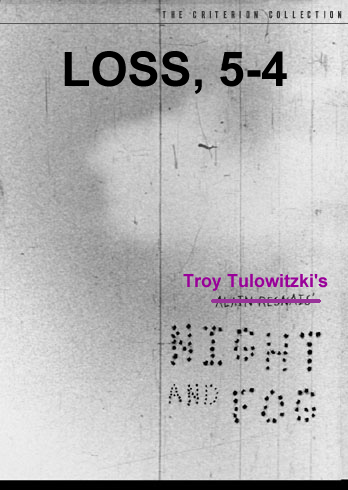 On a foggy night in Flushing, Jon Niese initially looked as if he'd regained the form he flashed in Florida, cruising through the first four innings with little incident. He negotiated through a jam when Willia Harris misplayed a ball in the second, and allowed just one run on a Todd Helton RBI single in the third.

Unfortunately, in the top of the fifth, after a walk and a single, the Mets decided to pitch to Troy Tulowitzki even though first base was open. One could argue it was too early in the game to intentionally walk anyone, though one could also argue that Tulowitzki had destroyed Mets pitching all series and is also pretty good at hitting baseballs.

Terry Collins opted not to load the bases. The result: an opposite field Tulowitzki homer, to a spot in the right field stands usually reserved for Chase Utley Specials. It was an odd home run, one that loped slowly in the air and did not look at all like a home run until it landed in the seats. But it was still a home run, and it turned a 3-1 lead into a 4-3 deficit. Colorado added on with a much more conventional looking Ryan Spilbourghs solo shot in the top of the sixth.

As for the bats, the Mets took an early lead on RBI doubles by Carlos Beltran and Daniel Murphy, and scored another run on a wild pitch from Esmil Rogers. But once again, they could not capitalize on numerous opportunities against the Rockies starter, leaving a staggering 15 men on base.

On the plus side, for once the bullpen was not the responsible party. Taylor Buchholz worked around a leadoff walk and steals of second and third by Jonathan Herrera to strand him there in the seventh, while Pedro Beato managed a scoreless eighth and DJ Carrasco (presumably no longer the spot starter on Friday) recovered from a bloop double to keep Colorado off the board. Still smarting from earlier, Collins decided to give Tulowitzki a free pass this time around, and was rewarded with an inning-ending groundout.

The Mets scratched out a run to crawl on an Angel Pagan sac fly in the seventh to crawl within one, but otherwise the Rockies' bullpen was once again flawless. Matt Lindstrom and Huston Street set them down in order in the eighth and night, knocking them to 4-7 on the year and 0-3 when I do the recaps.

To pitch or not to pitch to Tulo? It's debatable. As great as he is, it's not as if the Rockies have no other good hitters in their lineup. Regardless, the sad fact is, despite Tulo's homer, the Mets were simply beaten by a better team. Those might be the most frustrating losses of all, the ones where you can crawl and fight and kick and scratch and play with all your might, and still lose because the other guy's just too damn good.

Such is life. Especially if your life involves being the Mets right now. 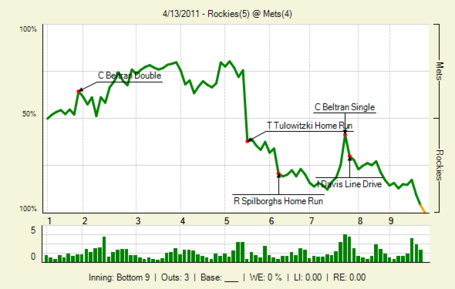 Nice job by sparbz; his effort in the game thread embiggens us all.