Despite the heartbreaking way in which their season ended, the 2006 Mets remain my favorite incarnation of the team. My earliest memories came a couple years after the Mets won the World Series in 1986, and although I can certainly remember the 1999 and 2000 teams, it wasn't until 2006 that I was able to so thoroughly enjoy a summer of baseball. Carlos Delgado, who recently announced his retirement, was one of the most enjoyable players to watch that season.

Delgado's tenure with the Mets began a year later than it could have as the team's front office botched negotiations with the slugging first baseman in the winter between the 2004 and 2005 seasons. Delgado said he was turned off to the team because Omar Minaya and Tony Bernazard were overemphasizing the Latin heritage they shared with him. Delgado chose to accept an offer from the Florida Marlins instead, but the Marlins wound up dealing him to the Mets after the 2005 season in exchange for Mike Jacobs, Grant Psomas, and Yusmeiro Petit.

In his first season with the team, Delgado did everything the Mets could have possibly asked, hitting 38 home runs and posting a slash line of .265/.361/.548 and .376 wOBA in the regular season. Most of those 38 home runs were no doubters, and the average home run he hit during the season traveled 398.4 feet, according to hittrackeronline.com. Here's what those home runs looked like from above: 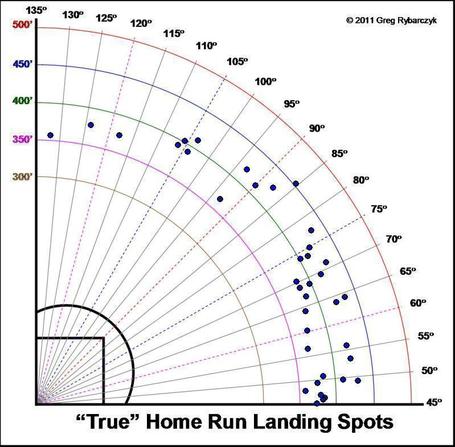 While his regular season went very well, Delgado's postseason was even better. In 43 plate appearances between the NLDS and NLCS, Delgado hit .351/.442/.757 - that's a 1.199 OPS - with 4 home runs. I remember sitting in the upper deck of Shea Stadium for one of those home runs, which came in Game 1 of the NLDS against the Dodgers, because it had to be one of the most spectacular home runs I've ever seen. The ball landed on top of the TV camera tower beyond the fence in center field. Hittrackeronline.com doesn't have data for the distance, and you can't see the ball land in the linked video, but it had to be one of the most impressive home runs in Shea's history.

As far as memorable performances go, Delgado had another one during the 2008 season when the Mets and Yankees played a two-stadium doubleheader. Delgado put on one of the team's greatest single-game hitting performances in the game at Yankee Stadium, driving in 9 runs. He also understood the role of luck when it comes to RBIs, stating after the game:

"I got lucky," Delgado said. "Every time I came up it seems like they had a lot of guys on base so I got some good pitches to hit and I was able to drive them."

When Carlos injured his hip early in the 2009 season, he was still raking at the plate. Unfortunately, the injury that sidelined him prevented him from ever playing in the big leagues again. When it was all said and done, Delgado's numbers with the Mets were: .267/.351/.506, 104 HR, and a 121 OPS+ in 2,023 Plate Appearances. He accumulated the fourth highest rWAR among first basemen in team history.

He may not have been a spectacular defender, but Delgado always seemed to hold his own in the field. Total Zone had him as a slight positive during his three full seasons with the team, and UZR/150 had him as a slight negative twice and a slight positive once. And it didn't hurt that he always seemed to have a handle on David Wright's errant throws to first base, mastering the ability to tag a runner when Wright threw a ball to his left.

Delgado certainly made his mark during his time with the Mets. His career slash line finished at .280/.383/.546. He hit 473 HR, and his OPS+ was 138. Although he's no lock for it, a Hall of Fame case could certainly be made for Delgado. Carlos Delgado may not have spent that many seasons with the Mets, but for the grand majority of the time he was on the team, he was quite the hitter.