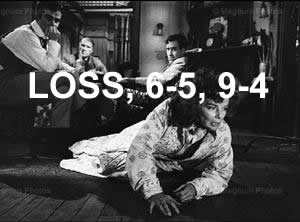 Here are the positives from today's doubleheader:

I've been preaching positivity and an even-keeled perspective in this still-young season as an antidote to the sad sackery professed by many Mets fans (and the beat writers who serve them). During today's games, the Mets played as if they specifically wanted me to question this stance. Oh, you think it's too early to judge this team? How 'bout we misplay every ball hit to the outfield and give up titanic home runs to nobodies. Still feelin' all Mr. Rogers sunshine-and-lollipops now, buddy? The crap we pulled would make the Dalai Lama punch a hole in a car window.

For you masochists who absolutely must relive this nightmare, stop me if you've heard this one before. In game one, the Mets jumped out to an early 2-0 lead, but could not capitalize on numerous opportunities and watched the Rockies surge ahead with timely hitting and the longball. R.A. Dickey had a decent outing, but was victimized by some ugly fielding in right by Scott Hairston (just one of several bad plays Mets outfielders had on the day).

Trailing 6-2 going into the eighth, the Mets crawled a little closer on a Jose Reyes solo shot in that frame, then got to within one thanks to a redemptive Hairston two-run homer in the ninth. A few more hits chased Rockies closer Huston Street from the game, and the Mets managed to load the bases, but David Wright was undone by Citi Field's cavernous and eccentric dimensions, flying out to the Mo's Zone in right field to end the game and kill another tease of a rally.

In game 2, oh, look at that, the Mets took an early 2-0 lead again. And whaddya know? They gave it right back. A Jose Reyes two-run single put the Mets back on top 4-2 in the fourth, but starter Chris Capuano got into trouble in the sixth by giving up a leadoff homer to (guess who?) Troy Tulowitzki, loaded the bases, then got a tailor made double play grounder that was flubbed by Brad Emaus, allowing the tying run to score.

Naturally, Dexter Fowler followed with an RBI single to put the Rockies on top. Then, Taylor Buchholz came in to make sure there could be no teasing, half-hearted comeback by giving up a three-run bomb to Jonathan Herrera. It was all over but the shouting then, not that Citi Field had enough people in attendance to shout.

Thus concudes a 1-6 homestand, where the Mets played worse than I've seen since the hideous Art Howe years. This team is much more talented than those squads, but you'd never know it watching them. The Mets were done in by terrible at bats, terrible fielding, terrible base running, terrible throws, terrible pitch selection, and terrible decisions.

Next, Atlanta. Before you say that things can't get any worse, things can always get worse. Especially in Atlanta. I fully expect them to come back with the entire team infected by Legionnaire's disease.

Oh, I thought of one more positive. You know those long winter days when you wish there was some baseball, any baseball on? Think of this Rockie series and maybe you can wait a little while longer for the season to start. Oh yeah, sometimes baseball is like that, too. 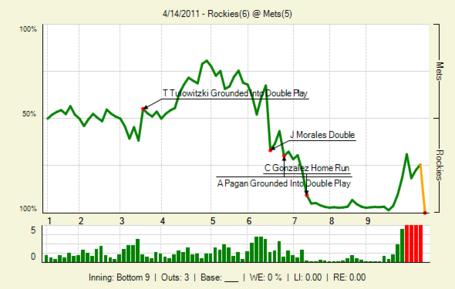 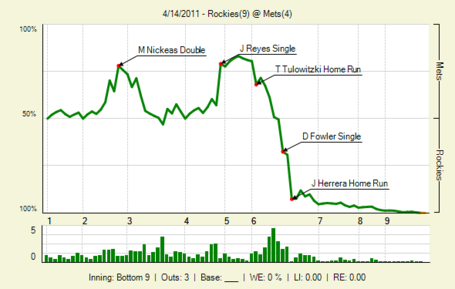 Nice job by reyoreyo; his efforts in both game threads embiggen us all.