For the first game of the team's second doubleheader in three days, Mets fans were treated to a craptacular Fox broadcast starring Tim McCarver and Matt Vasgersian. The game itself got off to a poor start for the Mets with D.J. Carrasco allowing a solo home run to arch nemesis Larry Chipper Jones in the first inning. In the second, Carrasco served up a very similar looking home run to Alex Gonzalez.

The best opportunity for the Mets to score early in the game was in the third inning with runners on the corners, two outs, and David Wright at the plate. Wright drilled a line drive that was caught by Alex Gonzalez. Depending on who you ask, either Gonzalez just happened to be in the perfect spot, or Wright just proved once again that he is not clutch.

In the bottom of the third, Carrasco hit leadoff man Nate McLouth. With Chipper at the plate, McLouth attempted to steal second base and beat Josh Thole's throw by a mile, but Jose Reyes applied a tag anyways and got the out as McLouth's foot came off the bag. Tim McCarver's analysis of the replay: "Did his foot come off the bag? Yes! No! Yes!" Indeed it did, and Thole officially threw out his first baserunner of the season.

The only good part of the broadcast came in the top of the fourth inning when R.A. Dickey was interviewed about his plan to climb Mount Kilimanjaro. Dickey will be joined by Mets bullpen catcher Dave Racaniello and Minnesota Twins pitcher Kevin Slowey as he slays leopards and raises money to support Red Light District Outreach Mumbai, an organization which is devoted to helping victims of human trafficking.

In the fourth inning, the McCarver-Vasgersian Duo proceeded to get into a hilarious conversation about Freddi Gonzalez making an undercover trip to the SABR Conference to find out more about the quantification of the game of baseball. Apparently neither broadcaster is aware that SABR has nothing to do with sabermetrics. When Alex Gonzalez hit another solo home run off Carrasco, McCarver exclaimed, "quantify that!" Ryota Igarashi was summoned from the bullpen and got out of the inning unscathed.

Jose Reyes put the Mets on the board in the top of the fifth with runners on the corners and nobody out, grounding into a fielder's choice that would have been a 4-6-3 double play if not for Reyes' speed. Unfortunately, Angel Pagan followed that up by hitting into a 4-6-3 double play.

The Mets got a run closer in the sixth inning when Willie Harris drove a ball deep into the left-center field gap with Carlos Beltran running from first base on the pitch and easily coming around to score. Harris advanced to third on an error by Martin Prado but was stranded there on an inning-ending pop-up by Brad Emaus.

Pat Misch, who had entered the game to start the bottom of the fifth inning, allowed Freddie Freeman to hit the Braves' fourth solo home run of the game and reclaim a two-run lead for his team. As the ball traveled over the right field fence, Vasgersian screamed, "Freddie Freeman, go get yourself some!"

The Mets threatened to score again with two outs in the 7th inning after Reyes and Pagan each drew a walk, but Wright lifted a shallow fly ball to right field to end the inning. The bats didn't do much else for the remainder of the game. The small silver lining from the remainder of the game was that Bobby Parnell threw two scoreless innings to quiet the Braves' bats, too, and got 8 swinging strikes on his 39 pitches.

That's six losses in a row for the Mets, who hope to break their losing streak in the nightcap. 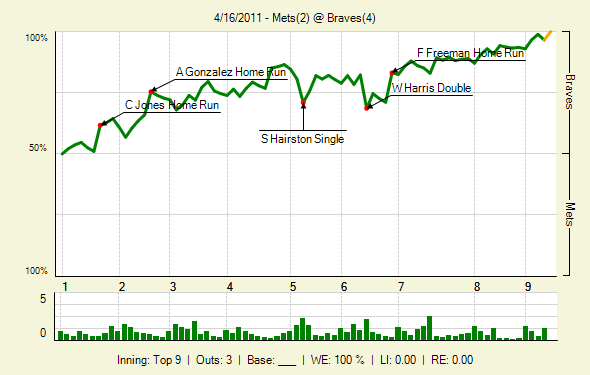