Share All sharing options for: New York Mets Daily Farm System Report - 4/19: Ma Familia, and You Can't Have Him

*All results from games played on Monday, April 18th 2011

POSTPONED DUE TO SNOW, YES, SNOW.  Doubleheader today with Mejia taking the mound at 12:05 pm, not three years from 12:05 pm.

PORTLAND 5, BINGHAMTON 6 (Box) Starting pitcher Brandon Moore retired his first eleven batters and the crowd was thinking, "Sweet, maybe he puked!" See, Moore felt sick and vomited before pitching the first no hitter in Cyclones history back in 2009 and felt barfy throughout that game (Seven innings but official, part of a quickie double-header.) Last night, alas, the right-hander's stomach rebounded and he coughed up (or kept down?) five straight singles in a very bad fifth inning. But no matter. Powered by the glossy, lustrous bat of Josh Satin, Bingo put up just the right number and won!

FORT MYERS 6, ST. LUCIE 4 (Box) Last night only, if you proved you owed money on your tax return you got into the ballpark free. After winning nine straight, St. Lucie owed something to the baseball gods and finally paid up. It wasn't Familia's fault though. Reportedly, the twenty-one year old's fastball was coming in at 93/94, his changeup at 84, and though he struggled a bit with command he still looked very good. Exciting stuff.

SAVANNAH 1, GREENSBORO 5 (Box). The Gnats weren't really hitting and last year's sixth round pick Greg Peavey struck out five, walked none, but must have left a good many over the plate. He lasted four innings and the bullpen kept bleeding. Our boys were 0-9 with a man on second or better.

The Goat of the Night is Wilmer Flores and his 0-4 with a fielding error. The thing about the nineteen-year-old Wilmer, though, is that he looks like this: 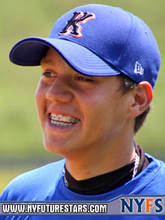 Maybe he's aged a bit since this adorable picture, but Home Alone was still made before his birth. Baseball America's #59 top prospect has started just a teensy bit slow but on the bright side has five walks in eleven games. Last year at this level he had only nine in sixty-seven.