Astros 6, Mets 1: Everyone Knows It's Wandy

Share All sharing options for: Astros 6, Mets 1: Everyone Knows It's Wandy

On another drizzly, chilly evening in Flushing, the "meh" Jon Niese made an appearance--nothing to write home about, but a decided improvement on the dreadful one who'd been seen in his previous two starts. Niese showed a decent curve at times and managed a few timely double plays to skirt out of trouble. But just like everyone else in the Mets' pitching staff, he fell behind far too many batters, walking five and making unnecessary work for himself, thus causing him to expend 113 pitches just to get through six innings.

The Astros scored against him on a Carlos Lee RBI single in the first and a J.R. Towles double in the fourth. The damage would have been worse but for a nifty diving play by David Wright in the third, which turned an errant throw by Justin Turner into an out at third, and Josh Thole tagging out Bill Hall at the plate to end the sixth. With Pedro Beato on in relief in the seventh, the Astros' lead expanded to 3-0 thanks to a Scott Hairston miscue that made Todd Hundley look like Barry Bonds. (The young Barry Bonds, the one who was good at left field.) That flub came off the bat of Lee, who became a first-class Mets killer when nobody was looking.

Wandy Rodriguez looked awful in his first three starts of the season, but unfortunately for the Mets, he managed to figure something out on his way to CitiField. Either that, or the Mets obliged him with one impatient at bat after another. In either case, they only managed one hit and two walks through the first six innings as Rodriguez turned in a performance that was not so much dominating as it was infuriating. The Mets finally cracked the runs column with a Carlos Beltran homer in the seventh, and even mounted a scoring threat later in the inning by putting two men on base at once! But Rodriguez fanned pinch hitter Chin-lung Hu with a few well snapped curves to stifle the rally.

Shortly thereafter, the leaky bullpen that took a break in Atlanta reappeared. In the the eighth, Ryota Igarashi and Tim Byrdak conspired to load the bases, then Bobby Parnell allowed all three inherited runners to score on the cheapest balk in recorded history and a two-run single from professional nobody Angel Sanchez. I'm beginning to suspect Bobby Parnell isn't very good.

Terry Collins missed a prime opportunity to get himself tossed in the eighth inning, when second base umpire Doug Eddings egregiously blew a call right in front of him. Bill Hall dropped a throw from the shortstop, but Eddings (perhaps dreaming of a post-game steak, Keith Hernandez style) gave Hall credit for a force out at second. I fully expect Collins' grission and fire to be unfavorably compared to Wally Backman's in all the tabloids tomorrow, since I've already seen such assertions in my Twitter feed. But with a five-run deficit, that bad call's impact on the game was negligible.

With Eddings' assistance, Fernando Abad and Jeff Fulchino combined for a scoreless eighth and ninth. The Mets are now 0-6 when I do the recaps, which makes me fear I may be DFA'ed by Sandy Alderson before long. I know that any team can beat any team on any given day, but you know what? The Mets shouldn't lose at home to the Astros. They just shouldn't. If they fail to win the next two games, I'll be forced to whine about their lackluster play some more.

Side note: The 1986 NLCS retrospective was pretty cool. It would have been cooler as its own special, not squashed between pitches of a game in progress. I appreciate SNY trying to celebrate team history, something the team itself still does not do very well. There's just better ways to do it, says the guy who's never worked in TV in his life. 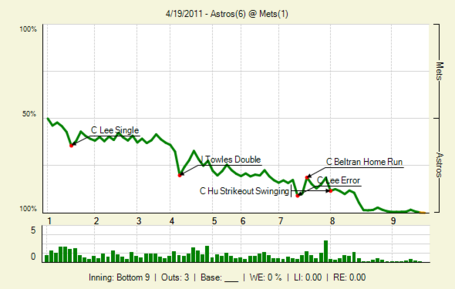 Nice job by reyoreyo; his effort in the game thread embiggens us all.