Share All sharing options for: The Top 50 Mets of All Time: #49 Bobby Bonilla

That comes from Bonilla’s comment in The New Bill James Historical Abstract, and it’s one of my favorite passages in the book. It’s certainly a funny comment, but that isn’t why I love it so much (well, it’s not the only reason). Here’s what I find so appealing: in one brief comment about his defense, James has somehow encapsulated the entire Bobby Bonilla experience. It was always easy to watch Bonilla and become so absorbed with what he couldn’t do that it was easy to miss all the ways he was actually making the club better.

Problems of perception began following Bonilla before his Mets career even got underway. After top-three MVP finishes in 1990 and 1991, there was a belief that Bonilla was an elite player. In retrospect, this idea was fairly silly. Voters were merely enthralled by high RBI totals generated by playing in the same lineup as stars Barry Bonds and Andy Van Slyke, as well as solid regulars like Sid Bream, Jay Bell, Jeff King, and Don Slaught. Because of this, when Bonilla hit free agency after 1991, teams seemed to mistake Bonilla for Bonds, a proposition that was as silly then as it appears today. 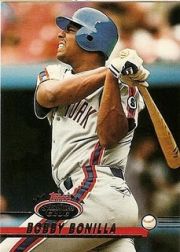 In 1990, when Bonds won the MVP and Bonilla finished second, Bonds had a .406 OBA; Bonilla’s was just .322, thanks to a career-low walk rate. Even when Bonilla’s bat improved to put up a career year in 1991, Bonds still outproduced his teammate across the board. Bonds was a top-notch athlete, a guy who may have been the best defensive left fielder in history and was capable of stealing 50 bases; Bonilla was slower and didn’t have a true defensive position, putting significant pressure on his bat to produce. And Bonds was a year-and-a-half younger. Oddly enough, many pointed to Bonilla’s easygoing clubhouse presence as perhaps Bobby’s largest edge over the mercurial Bonds, something at least one teammate disagreed with, calling Bonilla "kind of a phony." It was never fair to compare the two players, but the Al Harazin Mets stepped into the trap when they made Bonilla the highest-paid player in the game, outbidding the White Sox and four other teams to sign him to a five-year deal for $29 million.

At first it was all smiles as positive energy surrounded the retooled Mets, who also acquired first baseman Eddie Murray and ace starter Bret Saberhagen that offseason. Bonilla, a Bronx native, called it "almost a storybook." Later, in a now-infamous remark at his introductory press conference, Bonilla told reporters, "You guys are not gonna be able to knock the smile off my face." It should have been a harmless declaration of joy and self-confidence; instead, the phrasing made it a challenge to the New York media, one they’d remember in the coming months. Despite the misstep, the good feelings endured through Opening Day: Bonilla began his Mets career with a bang, knocking two home runs. It should have endeared him to the Shea faithful.

Ultimately, the true first impression he made on Mets fans was defined by the next 38 games—38 homerless games in which he batted .208 with a .246 slugging percentage. By midseason, the boos were loud enough to force Bonilla to fend off the jeers with earplugs. The two Opening Day homers were forgotten; he was now a high-priced bust. He did recover, however: from May 19 to August 1, the real Bonilla showed up, batting .284/.369/.502—pretty damn similar to his 1991 line. It didn’t last. On August 2, Bonilla fractured his rib diving for a foul ball in a game against the Cubs. Manager Jeff Torborg gave Bonilla the option to sit out the rest of the season—a cracked rib isn’t serious, but it will affect play as it lingers—but Bonilla insisted upon playing. He returned on August 17, much sooner than anticipated, but he predictably struggled.

Despite Bonilla’s efforts to play through the rib injury, on September 17, his season ended. He had been playing with a torn labrum in his shoulder, and it needed to be surgically repaired. And that wasn’t all: doctors were shocked to discover he had also torn a tendon in his bicep. "He’s a tough kid, he played in pain, and I think that was lost in all of this season," Torborg said, amazed that Bonilla had managed to play at all. "It had to affect his swing, and everything else." The numbers were decidedly disappointing: a .249 average, a .432 slugging percentage, just 19 home runs and 70 RBI.

The recovery may have caused Bonilla to start slow in 1993, as he batted just .213/.304/.389 through 29 games. The team struggled mightily, finding itself 11.5 games behind the Phillies before it could blink. But Bonilla gradually began warming up, especially in the power department, slugging .558 from that point forward and ending with 34 home runs, seventh in the NL. Unfortunately, the on-field performance was marred by some off-field issues. The first came after the second home game of the season, an incident in which Bonilla, perhaps at Torborg’s instruction, publicly berated and threatened reporter Bob Klapisch, who had penned a book about the 1992 Mets entitled The Worst Team Money Could Buy. A month or so later, Bonilla had a shouting match with third-base coach Mike Cubbage during a game. The season should have been a redemption of sorts for Bonilla, but the team’s performance—they lost 103 games—and the two incidents became all Mets fans would remember from 1993.

New GM Joe McIlvaine explored trading Bonilla during the offseason but nothing came of it—the Orioles were interested but offered only a package consisting of outfielders Mike Devereaux and David Segui and reliever Brad Pennington. Bonilla returned to the team in 1994 and had another outstanding season, batting .290/.374/.504 over 108 games in a strike-shortened season. The next season he was even better, batting .329 with 28 home runs by July 26. His steallar performance meant McIlvaine was finally able to extort the package he wanted from the Orioles. Going back to his days as the Mets’ scouting director, McIlvaine had always been enamored with athletic, toolsy outfielders, and he acquired two for Bonilla: Damon Buford and Alex Ochoa, the crown jewel of the Orioles’ system, at least in McIlvaine’s eyes. 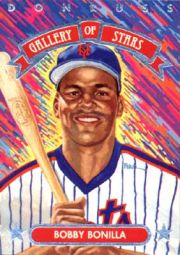 Ochoa never evolved as a player—he stagnated as a fourth outfielder—and Buford was gone by January while Bonilla continued to play well over the next several seasons. However, by 1998 he finally began showing his age after being dealt from the Marlins to the Dodgers in the Mike Piazza trade during the season. The Dodgers, wary of Bonilla’s poor production and shaky clubhouse presence, were eager to cut their losses. Steve Phillips, McIlvaine’s successor in New York, was similarly eager to dump his own albatross, reliever Mel Rojas who was set to earn $4.5 million in 1999. Figuring that a bad starting outfielder was much more valuable than a bad middle reliever, Phillips agreed to the swap despite the fact that Bonilla was still owed nearly $12 million over the next two seasons.

Upon joining the team, Bonilla seemed aware of his past mistakes. Referring to the "smile" comment, Bonilla admitted, "I said something at that first press conference I shouldn’t have said." He also claimed to have "learned to laugh at myself, no matter what anybody else writes." That didn’t stop 1999 from becoming a disaster. His defense in the outfield was routinely disparaged, he hit just .160, and he missed a huge portion of the season—thankfully—with a knee injury. Bonilla made it back just in time for the playoffs, but the only thing he provided was more controversy, joining Rickey Henderson in a card game during the final innings of Game 6 of the NLCS. Phillips, who had no interest in playing Bonilla under any circumstance in 2000, couldn’t find any takers for Bonilla’s bloated contract. So he bought him out of his final year and released him, deferring the money owed until July of 2011, ensuring the Mets will be paying Bonilla more than $1 million a year for the next 25 years. While the deal has often been criticized, it really helped out both sides. Bonilla now has a very steady source of income, and the freed money meant Phillips was able to pay for Mike Hampton, Derek Bell, and Todd Ziele, each of whom helped the Mets reach the World Series in 2000.

Bobby’s Mets career is often seen as one big bust, but he’s really one of the most underappreciated Mets ever. As I mentioned before, expectations were just too high—he wasn’t Bonds and it wasn’t his fault that he was paid like Bonds. Despite that, he was pretty much exactly the same hitter with the Mets as he had been with the Pirates. Take a look at this:

He was a slightly better hitter with the Pirates—the late 1980s and early 1990s were a depressed run-scoring environment—but not by very much. Bonilla instead gets blamed for the fact that his teams were routinely mismanaged, something that was clearly the fault of Al Harazin and Joe McIlvaine. Frankly, Bonilla was usually one of the few players playing up to expectations.

And while he’s often maligned as a clubhouse cancer, even that gets overblown. He never griped when the team moved him from right to left to third to first, nor does he get enough credit for his versatility. And while he was certainly difficult to manage, he was also intelligent and funny. When asked where he wanted to play upon returning to the Mets in 1999, Bonilla said, "Anywhere but designated hitter." Asked about his absurd buyout, Bonilla once remarked, "Hey, a blind squirrel can find an acorn." For the most part, Bonilla was harmless. Unlike his teammates, he never threw a firecracker into a crowd or squirted bleach at reporters; he was never accused of rape or exposing himself in public. Even the commotion with Klapisch in 1993 was admirable in a small way: Bonilla was willing to back up his manager in a confrontation that was likely to make him even more of a villain in the press. You don’t often think of him as an organizational soldier. No, Bonilla was mostly just loud, threatening, and self-interested, which are the same qualities many of my friends have.

Just a look at how Bonilla compares to other teams’ 49th best players by WAR:

There isn’t a sound comparison to Bonilla here; I suppose Jack Cust comes closest—a slugger who had a couple of big seasons for Oakland—but he didn’t have Bonilla’s versatility, and he wasn’t as complete a hitter as Bonilla, either. Cust’s career shape is vaguely similar, but he started off strong and gradually faded, whereas Bonilla started slow and was as good as ever when he left.

Eric wrote a fantastic profile of Bonilla that was mighty helpful to me as I composed this piece.

The Worst Team Money Could Buy: The Collapse of the New York Mets, by Bob Klapisch and John Harper, was a helpful resource as one of the few books written about the Mets of the early 1990s.

I didn’t really get into Bonilla’s early history, but if you’re interested you can find a wonderful piece from a 1991 issue of Sports Illustrated here.