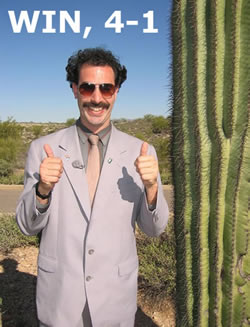 It looked like the BABIP monster was going to get the best of the Mets in this one. Most of the lineup was hitting the ball hard, but the Diamondbacks' outfielders in particular had a knack for tracking down everything hit to the outfield. Even a drive to the warning track by Mike Pelfrey was tracked down by Gerardo Parra.

Luckily, the Mets finally broke through for a pair of runs in the bottom of the 7th inning. David Wright drew a leadoff walk, and two outs later, Ike Davis hit a home run to dead center. The ball hit the awkward spot on the fence above the orange line and wasn't a originally ruled a home run, but a quick replay review by the umpires corrected the call. It'd be nice if the Mets had cut down that portion of the wall when they adjusted the home run line after 2009.

Pelfrey had his longest outing of the season thus far, giving up only 1 run in 7 innings pitched while striking out 4 and only issuing 2 walks. Only 3 of his 13 other outs came on the ground, but the most of the fly balls he allowed were relatively harmless. The only one that did harm was a bloop single in the third inning that scored Arizona's only run.

The Mets added two insurance runs in the eighth inning thanks to some laughable play by the Diamondbacks. Jose Reyes reached on an error, Daniel Murphy singled, and a wild pitch advanced both baserunners. Reyes appeared to jam his pinky on a head-first slide into third base on the play, but there was no sign of serious injury during the short remainder of the game. Wright proceeded to draw another walk to load the bases, and Carlos Beltran drilled a single through the hole between first and second base, plating Reyes. With the bases still loaded and nobody out, Jason Bay struck out and Davis popped up weakly, but Ryan Roberts botched what should have been an inning-ending ground ball off the bat of Mike Nickeas, giving the Mets another run.

The well-rested bullpen was quite effective in relief of Pelfrey. Prior to Arizona's comedy of errors, Jason Isringhausen pitched an easy 1-2-3 eighth inning. Francisco Rodriguez came on to pitch the ninth inning, and although he walked a batter, he struck out two and earned the save. 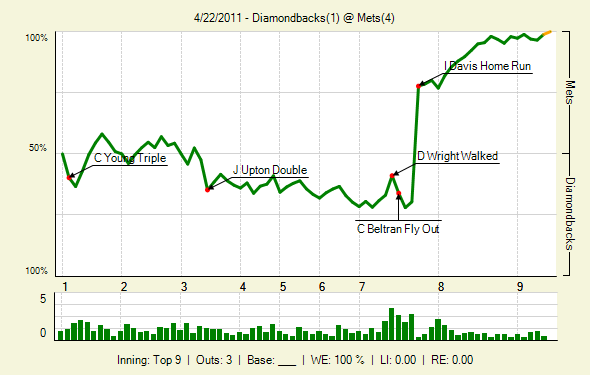