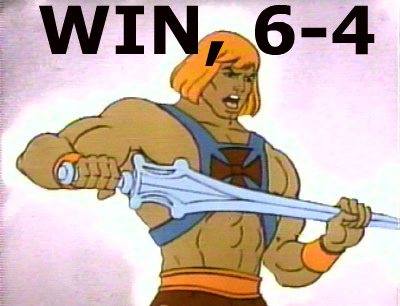 The Mets got off to an inauspicious start today, falling behind 1-0 in the first inning after a Justin Upton bloop single and Stephen Drew line drive which Ike Davis misplayed into a triple. The normally sure-handed Davis attempted to backhand the ball and completely whiffed. No bother -- his teammates picked him up in the bottom half of the frame, scoring two runs on a walk by Jose Reyes, a single by David Wright and a two-RBI single by Jason Bay. Reyes is now 9-for-19 with a pair of walks when leading off a game this season.

Bay cracked his first home run of the year in the third inning, an oppo solo shot into the bullpen off Diamondbacks starter Barry Enright. Davis followed with a mammoth shot of his own into the Pepsi Porch, redeeming his first inning defensive miscue. The Mets were leading 4-1 headed into the fourth until a Daniel Murphy error led to two unearned runs charged to Dillon Gee, who deserved better. Murphy has been a nice surprise in the field but the error was both ugly and costly.

A Miguel Montero bomb tied the game at 4-4 in the sixth. But like Davis, Murph atoned, picking up RBI singles in both the sixth and eighth innings. Pedro Beato, Jason Isringhausen and Francisco Rodriguez struck out six in three innings of scoreless relief. Frankie notched a John Franco save, giving up two base hits before closing the door. 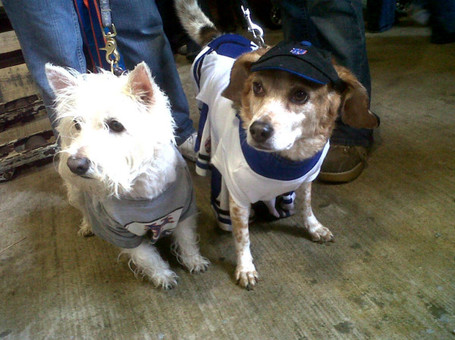 That's a three game winning streak, with a chance to sweep the D-Backs tomorrow. Jon Niese faces the very hittable Armando Galarraga at 1:10 on SNY. Take out your brooms. 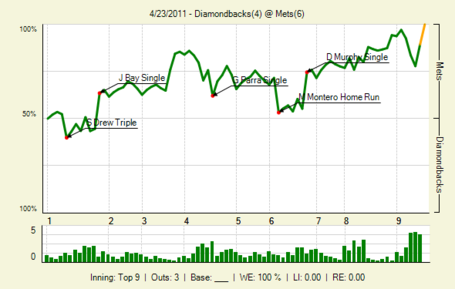