*All results from games played on Sunday, April 24th 2011

LEHIGH VALLEY 7, BUFFALO 5 (Box) For the second consecutive day the Herd dropped a game to the Iron Pigs by the score of 7-5 in which they led twice before coughing it up late. RHP Jenrry Mejia was unspectacular, allowing five runs over six though it was pretty much localized to a crummy third inning where he seemed to lose composure. The previous inning he was hit by a pitch and then picked off second on a bad base-running play. He responded by walking two batters and making a throwing error before allowing a three-run bomb. Manager Tim Teufel said after the game, 'I think he maybe took a little bit of that to the mound...That one inning was a concentration inning. He let it get away a little bit but the rest of the game he was good....He just let that one go and lost a little focus." And despite five runs including a ninth inning rally, the Bisons offense really should have been better as they went 4-for-17 with RISP.

With only one game on Sunday's docket we'll fill the crushing emptiness with some still images from Buffalo, NY! 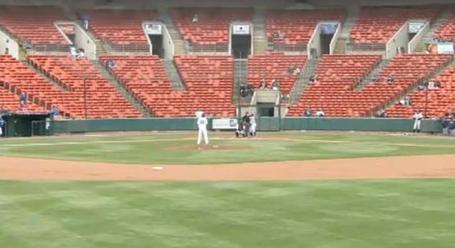 Not exactly a record turnout for yesterday's game. 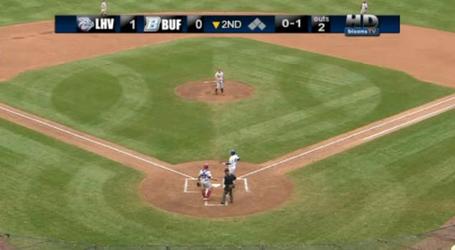 Mejia getting picked off, frame-by-frame: 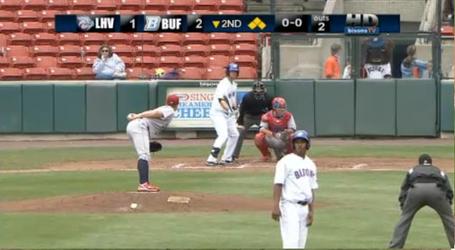 "Check out that cool bird flying around out there. It's got some red on it's wings." 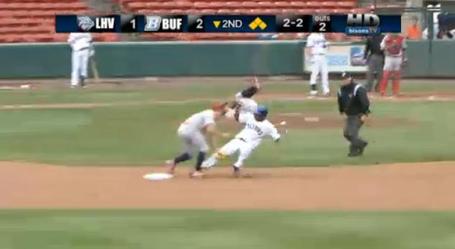 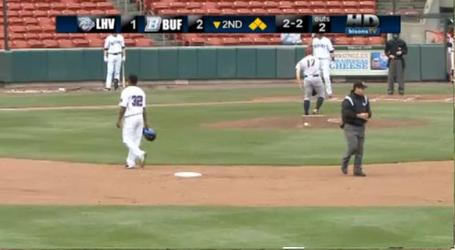 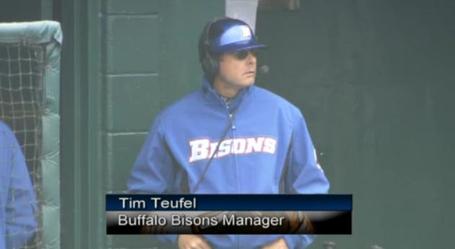 For the star, it's about time to recognize Captain Kirk Nieuwenhuis for his nice 2-for-4 day with two doubles and for his impressive stretch of 18 straight games getting on base; that's every game of the season thus far. In addition, he's riding a 14-game hit streak, the longest in the IL this season and he's batting .400 over his last ten games. I know it was the right move to promote Pridie and let Kirk continue to improve against Triple-A pitching but I must say I'd love to watch this guy up at Citi right now.
Can't really blame any of the hitters as each one had at least one hit and seeing as he not only gave up five runs but also made a throwing error AND got picked off to end the inning with the Captain at the plate with the bases loaded yesterday, we're gonna have to give Goat of the Night honors to Jenrry Mejia. Shake it off Jenrry, happens to the best of us.

True to my word here's a profile of the hot-hitting Sand Gnats first baseman. Because as someone close to Honeck pointed out a couple weeks back, everyone deserves some credit for their accomplishments, big name prospect or not.

Honeck was an eleventh round draft pick by the Mets back in 2009 out of Emaus U. (aka Tulane). After having spent his first couple of collegiate seasons at Grayson Community College in his native Texas, the Austin-native was a mainstay at first for the Green Wave, appearing in 60 and 59 games in his two years with the club. He also had quite the senior season, knocking 16 bombs while batting .312 with an impressive 54:47 BB-to-K ratio.

After being drafted and assigned to Brooklyn late in the summer, you could say that Honeck followed in the footsteps of another big, strong lefty first baseman, Ike Davis. And if you remember Ike's stay with the 'Clones you know that isn't a good thing. One year after Ike did it, Honeck struggled with the bat against NYPL pitching, especially power-wise. In fact the statistical similarity is pretty striking:

Unfortunately for Honeck, he didn't get the same chance to prove Brooklyn was a fluke as he broke his leg just six games into the 2010 season while playing with Savannah. It was a particularly gruesome injury where he broke both his tibia and his fibula during a collision at home plate and required extensive surgery and screws in his leg. Strangely, both of Honeck's brothers had suffered broken legs prior to the incident -- his brother Creighton, who is a professional golfer, broke his just two weeks earlier in a car accident. Note to the Honeck family: Do not go skiing.

Cleared to play just days before camp broke in 2011, Honeck is making up for lost time in Savannah, raking the ball early in the spring season. Honeck leads the club in hitting with a .362 average, ranks among the  SAL leaders in doubles, RBI's and OPS and just came off an eight-game hit streak. As I stated a couple weeks back, Honeck isn't a big name prospect by any means and frankly as a college player he should be hitting Lo-A pitching. However, having lost a year to injury he gets swept under the rug due to his age yet if he can couple the power he displayed as a senior with his customary excellent plate discipline there's no reason why he can't follow in the footsteps of a guy like Eric Campbell as a very solid corner IF, college bat emerging as a legit player at the Double-A level.