The sputtering Nationals have lost four of their last five, including two of three to the lowly Pittsburgh Pirates. The Mets have been playing well so we'll see if they can use some of that hot streak swagger to defeat a down-in-the-dumps team. Here are the pitching matchups for the three game series at Nationals Park:

Steven McCatty is the Nats' pitching coach. He took over in June 2009 following the dismissal of Randy St. Claire. McCatty pitched in the big leagues from 1977-1985 for the Oakland Athletics, enjoying a career year in 1981. He is one of the few privileged human beings to have played on a baseball team with Rickey Henderson.

Interesting fact: Zimmermann's last name has been misspelled by Sports Illustrated, Nationals.com and the Nats' bat maker. I can sympathize.

What's the story? The highly-touted Zimmermann underwent Tommy John surgery in late 2009 and has made a full recovery. His fastball velocity is back in the low-to-mid 90s, and Cliff Lee recently said of Zimm's heater "that might be the best fastball I've ever seen". Hyperbole alert, but still. The strikeouts haven't yet come for Zimm this season but in his young career his punchout rate is a terrific 8.2 per 9 innings. His control is also above average. He's Dan Haren-lite, statistically at least. Zimmermann throws a slider, curveball and changeup to complement his fastball, with the slider his favored secondary pitch this season.

Against the Mets: Zimmermann has enjoyed modest success in his 25.2 career innings against the Mets: a 3.51 ERA with 22 strikeouts against 8 walks. He allowed 2 runs in 5.1 innings during a 6-2 Nationals victory at Citi Field a few weeks ago on April 8th.

Interesting fact: In 2008, the Pirates gave away this Gorzelanny bobblehead which may or may not be giving the finger: 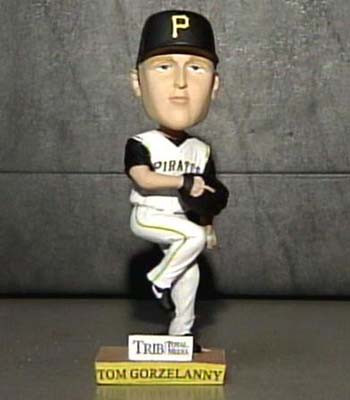 What's the story? The Pirates thought they had a keeper in Gorzelanny after he put up a 3.88 ERA in 201.2 innings as a 24 year-old in 2007. Things quickly fell apart as his control deteriorated in 2008. He was dealt to the Cubs at the 2009 trade deadline and his peripherals rebounded in the second half to give the Cubbies some hope going forward. His 2010 campaign was respectable -- a 3.92 FIP in 136.1 innings, which translated to 2.3 fWAR. The Cubs sent him to Washington this past January for three prospects and he has struggled in his brief Nationals tenure. Gorzelanny used to throw a low-90s fastball but now it sits in the high 80s. A curveball and changeup complete his repertoire. He reminds me a little of Oliver Perez -- an erratic, flyballing lefty with control issues and some strikeout talent.

Against the Mets: In 30 career innings against the Mets, Gorzelanny owns a 5.70 ERA with a 1.21 K/BB ratio. He allowed two home runs to Carlos Beltran in an 8-4 Mets win back on April 9th of this year.

Interesting fact: Diamondbacks bullpen catcher Jeff Motuzas used to let Hernandez punch him in the groin for $50 a pop. Every ten punches warranted a $300 bonus.

What's the story? Y'all know Livan. His career looked over after a 2008 season in which he struck out just 3.4 batters per 9 innings and posted a 6.05 ERA in 180 innings. Omar Minaya signed him as insurance for 2009 and he went on to pitch 135 essentially replacement level innings for the Mets. He was cut in August and the Nationals swooped in to pick up "Mr. National". He made the Nats in 2010 and surprised everyone, suppressing home runs on his way to a 3.66 ERA. He has picked up this season right where he left off 2010, posting almost identical peripherals. It's kind of amazing that he's still in the league. However, he has pitched well over the last year and change, so credit where credit is due. One day those flyballs will start shooting over the fence. Livan throws every type of pitch, each one slower than the last.

Overall outlook: Zimmermann presents a tough matchup for righties David Wright and Jason Bay. Considering we don't know what to expect from his Mets counterpart -- Young, coming off of injury -- game one looks like the Nats' best chance for a win. The Mets handle lefties well and Gorzelanny struggles against righties. And it's about time Livan gets mashed back to the stone age. Games two and three go to the Metsies.