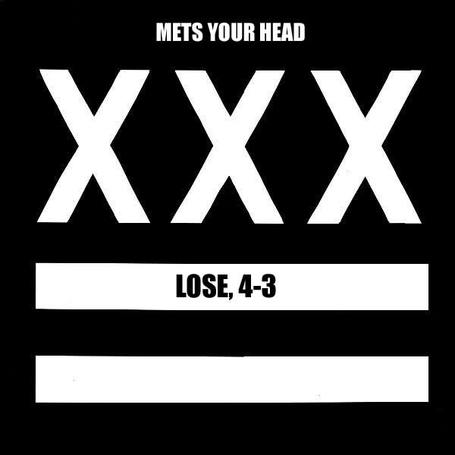 If you've watched Livan Hernandez at any time during the last five years, you saw what he did tonight: worked with Greg Maddux-esque efficiently, kept hitters off balance, and bent but never broke. He seems to turn in such outings three or four times a year against the Mets (and briefly with the Mets in 2009), sprinkling in the occasional stinker just to make you think he's finally losing it. I am beyond raging at or bargaining with Hernandez's power over the Mets, and have moved on into the acceptance stage.

His counterpart, Chris Capuano, turned in another middling outing--no more powerful than Hernandez, really, but far less efficient and effective. He was victimized by a ball Carlos Beltran misplayed into an RBI ground rule double in the third, then victimized himself by allowing five straight hits in the fourth that plated two runs. The second run scored on a sac bunt from Hernandez that wound up functioning as a squeeze play thanks to some heads-up baserunning from Jerry Hairston Jr. The Nats scored their fourth run on a solo shot from proud papa Ian Desmond, just back from paternity leave, in the fifth.

The Mets scored single runs in the fourth, fifth, and sixth, and Tim Byrdak and Pedro Beato turned in another great outing from the bullpen. But though they hung in all game, somehow the Mets never appeared close to breaking things open against Hernandez. Even when they loaded the bases with one out in the fifth thanks to a misplayed sac bunt off of Capuano's bat, Hernandez remained in total control. Ike Davis's RBI double in the sixth seemed the only ball hit with authority against him all night.

A two-out single from Jose Reyes in the seventh went for naught when he was caught stealing by the ageless arm of Pudge Rodriguez. Hernandez needed only six pitches to dispatch of the heart of the Mets' batting order in the eighth, at that point throwing like a man possessed (or a man in serious trouble with the feds and powerful drug lords).

With recent grittiness in mind, hopes were high when Josh Thole managed a two-out single against Drew Storen in the ninth, then pinch runner Chin-lung Hu stole a base. Unfortunately, Willie Harris continued his history of hurting the Mets in Washington by striking out to end the game. Thus ended the six-game winning streak and dreams of a sweep in DC.

The last time I did a recap, the Mets lost the opener at home against the Astros and were in the midst of a miserable stretch where nothing went right for them. It's amazing how much can change in a week or so. I'm not all that upset by this loss, and I doubt many other fans are either. Apart from Beltran's miscue (redeemed, I'd say, by several great plays later in the game) and Harris's antsiness at the plate (apart from the game-ending K, he also swung at a 2-0 pitch at eye level in the pivotal fifth inning), it's hard to find much the Mets could've done better in this game.

Put this one in the "Eh, Whatta Ya Gonna Do?" book and prepare for Philadelphia, I'd say. Let's hope Pelfrey pitches better with 11 pounds melted off his frame by the flu. 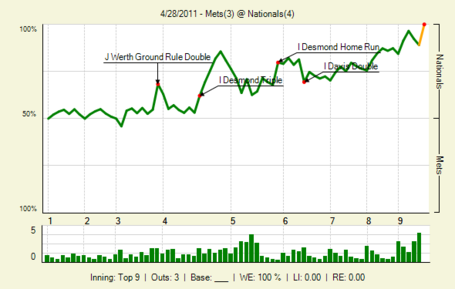 Nice job by BobbyV_Icognito; his effort in the game thread embiggens us all.