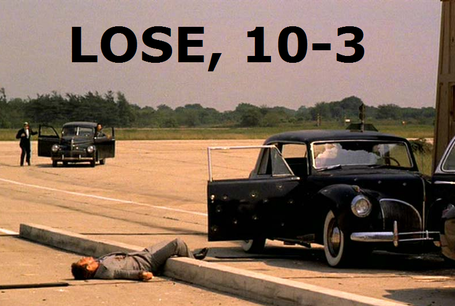 I'm trying to figure out what Mike Pelfrey does well. He doesn't miss bats -- that's been known for awhile. His control is average at best and terrible this season. He used to be a kinda-sorta groundball pitcher if you squint. That's disappeared. I suppose he's effective at suppressing home runs when pitching at home. If that is your only skill, you probably are not long for the big leagues.

Pelfrey endured another poor start tonight. He lasted just 4.1 innings, allowing 4 runs on 8 hits, including a 2-run homer to Ryan Howard. He did strike out three, but one came against the opposing pitcher, Vance Worley, and the other two were against walking corpse Raul Ibanez. They're not saying "RaUUUULLL" -- they're booing. Pelfrey's BABIP is obscenely high but that's not a viable excuse given his awful peripherals.

The Mets need to figure out what to do with Pelf. His velocity is down, his ERA is 7.39 and there's really nothing to like about his performance this season. Maybe his splitter is a positive -- he threw 15 of them tonight and 10 went for strikes. What to do? Send him to the minors? Trade him? Let him ride this out? Pelfrey has been remarkably atrocious on the road, as Mark Simon of ESPN notes. Should the rotation order be tailored to have Pelf pitch only at Citi Field? Maybe he'll improve the next time out, further removed from the effects of the flu.

Terry Collins called on Dillon Gee to relieve Pelfrey with one out in the fifth inning. Gee hasn't pitched out of the bullpen in years and it seemed like a strange decision. Even more curious was not summoning Tim Byrdak to face Howard in the sixth inning with two outs and the bases loaded. If Byrdak isn't used in that spot then he may as well not be on the roster. Gee induced two swinging strikes against Howard before allowing a grand slam. That made the score 8-0 and killed any slim hopes of a comeback.

Ike Davis and Jason Pridie both homered in the ninth inning to thwart the shutout. Ike's was a solo shot to center and Pridie's was a two-run job to right-center. The Mets' offense was non-existent until that point against the rookie Worley, who struck out five (all looking) in six shutout innings. He had some help from home plate umpire Gary Cederstrom, who expanded the outside corner of the strike zone for lefthanded batters. Here is his strike zone plot for righthanded batters -- this is from the catcher's point of view. Red = strikes; green = balls. Click the plots to embiggen:

Not bad. Almost robot-like, if pitch f/x is assumed to be accurate. And for lefthanded batters:

Yikes, check out the wide left side of the zone. At least he was consistent.

Happy birthday to the best play-by-play guy around, Gary Cohen. It's Jon Niese vs. Roy Halladay tomorrow at 1:10 on Fox.

Unintentionally sexual quote of the game: "Suppose he goes down below, what's he gonna work on?" -- Bob Ojeda 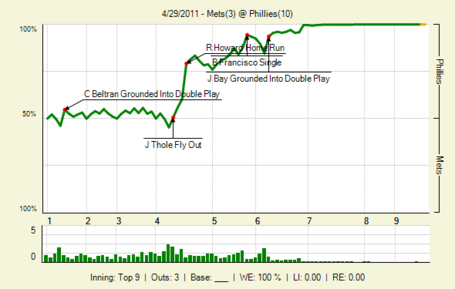