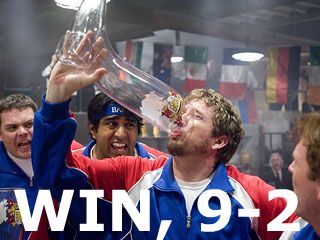 The Mets got off to a quick start this afternoon, jumping out to a 2-0 lead when Jose Reyes doubled and Willie Harris hit a home run to right field. The Mets were all over Javier Vazquez early, but they got some help from Hanley Ramirez, who threw away a ball on what would have been an inning-ending double play. A run scored, and the Mets were up 3-0.

The Mets' bats kept it going in the 3rd inning, starting with Ike Davis's solo home run, his first of the year. Daniel Murphy doubled in a run later in the inning, and then the Marlins signature "defense" showed up once again to hand some runs to the Mets. With the bases loaded and one out, Emilio Bonifacio fielded a groundball off the bat of R.A. Dickey and threw it over John Buck's head. Two runs scored on what should have been an inning-ending double play.

Dickey went on to toss 6 innings and gave up only 1 unearned run in the 3rd. He struck out 7 and managed to control the damage as he issued 3 walks. At the end of the day, it was a very good first start for Dickey. Chris Capuano made his debut with the Mets in the 7th, generating a quick pair of ground outs to start the inning. Three straight hits and a walk later, Capuano was pulled in favor of D.J. Carrasco, who likewise made his debut with the team, striking out John Buck with the bases loaded to end the inning.

The Marlins' "defense" showed up again in the top of the 8th as Randy Choate lolly-popped a throw way wide of first base and allowed pinch hitter Chin-lung Hu to reach safely. Later in the inning, the Marlins once again failed to turn a double play. After intentionally walking David Wright to load the bases, Choate unintentionally walked Angel Pagan to plate another run for the Mets. On the very next play, Hanley Ramirez had David Wright out by a mile for a force at third base, but Emilio Bonifacio failed to get his foot on the bag. Wright was safe, and the Mets scored once again.

Keeping up with the Mets' debuts, Tim Byrdak pitched the 8th inning and managed to escape unscathed despite allowing a pair of hits. Taylor Buchholz also allowed a pair of base runners but pitched a scoreless 9th inning to end the game. Three games into the season, Francisco Rodriguez has yet to record a Game Finished.

The Mets head back to New York this evening before beginning a three-game series in Philadelphia on Tuesday night. Winning 2 of 3 games in Florida after losing to Josh Johnson, one of the best pitchers on the planet, was a fine way to begin the year. 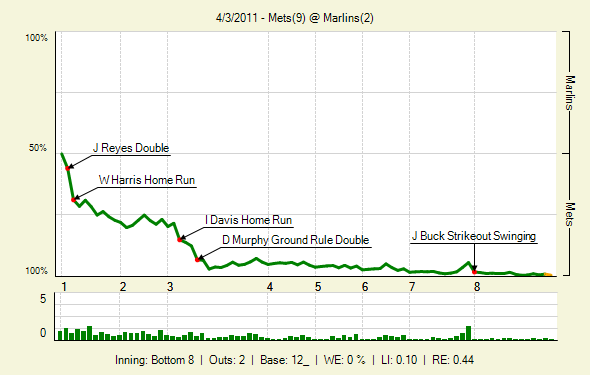