Sorry Pelfrey, but we all know the true ace.

R.A. Dickey's first start of the season yesterday went a long way toward assuaging doubts about last year's success. While uncharacteristically inefficient at times, everyone's favorite knuckleballer surrendered just one unearned run, striking out seven Marlins. I'm as excited to see what R.A. Dickey can do individually with a full season in the majors, as I am to watch the Mets as a whole this year. So expect plenty of micro-analysis of Dickey's season, starting today.

For some reason, I only managed to download 91 pitches from MLB gameday, but these charts are gibberish anyway, and if I hadn't just told you that, there's 0 chance you would have noticed.

I'm labeling the knuckleballs 1-3 in terms of speed, 1 being the hardest, 3 being Western Union. 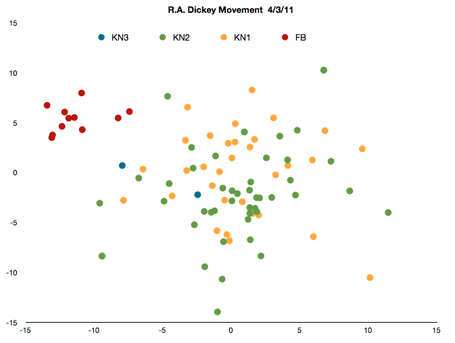 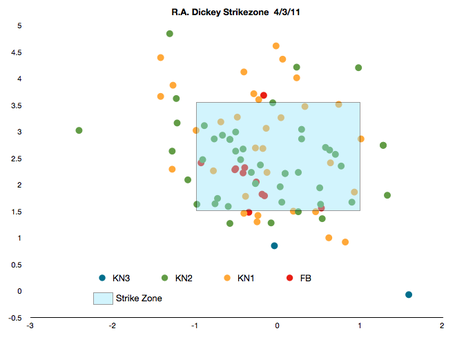 Omar Infante is now 9-17 with a home run against Dickey in his career. Maybe you think that's a small-sample size fluke, but I can't tell you one person who doesn't: R.A. Dickey. He made a concerted effort to vary his approach against Infante, with mixed results.

In the first inning, Dickey struck out Infante with six pitches. After showing the first hitter of the game, Chris Coghlan, all knuckleballs, Infante got a first pitch sinker down and in. He then gave him the following knuckleball sequence: hard low, slow low, hard high, hard away, hard high. The contrast of the slow knuckleball coaxed the first swinging strike and the final high-hard one worked like a classic high fastball strikeout.

In the third, with men on the corners and one out, Infante again came to the plate and Dickey again tried to tilt the count in his favor with a first-pitch fastball. Only this time, he missed. He came back with a second fastball down the middle, his only consecutive fastballs of the game, making it pretty clear how bad he wanted that first strike on Infante. He then went back to the low-slow knuckleball that got strike-two earlier. Infante golf-swinged it to center for a sac fly, a pretty good outcome, considering the score.

Infante finally got the best of his nemesis in the fifth frame. Dickey again came at him with the first-pitch fastball and Infante turned on it for a single. How he chooses to pitch Infante in the future will be interesting, as their match-up really has become a game within the game.

The early returns look good for R.A. Dickey. He was throwing his knuckleball for strikes at a variety of speeds, and as long as he can do that, he can get away with the odd flat sinker or Omar Infante hit.