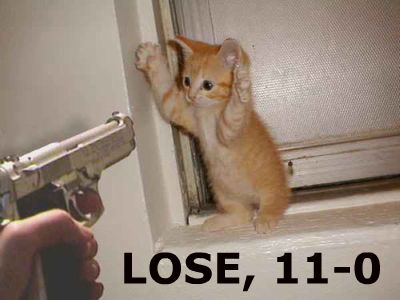 Much like Mike Pelfrey last night, Jon Niese made an early exit this afternoon. Despite striking out 7 and only walking 1, Niese was no match for Roy Halladay as he allowed 6 runs in 4 innings. Most of the 8 hits Niese allowed weren't exactly scorched, and besides his strikeouts, all of his outs came via the ground ball.

The Mets had a few frustrating moments at the plate early in the game as they kept getting at least one runner on base per inning but never brought any of them around to score. The biggest blown opportunity came when the Mets loaded the bases in the third inning with 1 out but failed to score when David Wright struck out and Ike Davis grounded out to end the inning. Unlike last night, the bats didn't have a run, never mind a rally, in them, and the Mets finished the game with a line of goose eggs. Halladay threw 7 innings, and Danys Baez and David Herndon closed things out.

The Phillies added a couple of runs off Pedro Beato in the fifth inning. Beato should have been out of the inning on a groundball double play, but Ike Davis fumbled around with the ball before throwing it into left field. Both baserunners came around to score later in the inning. Tim Byrdak and D.J. Carrasco allowed runs to score in the 7th and 8th innings, as well. Byrdak reminded everyone that lefty specialists like Pedro Feliciano don't grow on trees, allowing a home run to lefty Raul Ibanez.

In seemingly typical fashion, Wilson Valdez, whose bat hardly seemed adequate in the depleted 2009 Mets lineup, had a four-hit game for the Phillies.

All in all, it was a pretty brutal game, but the Mets return to Queens at 3-3, and with R.A. Dickey taking the mound against the Nationals tomorrow, things are already looking up. 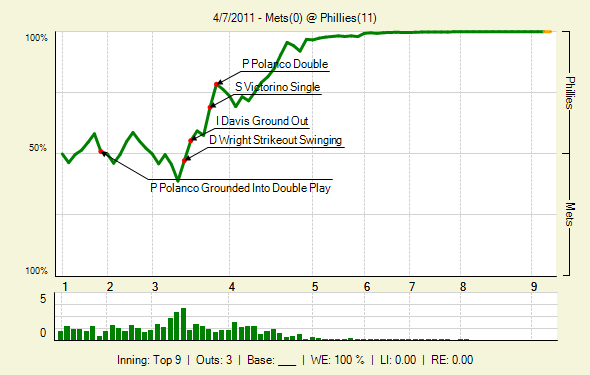 Nice job by SFloridaMetsFan; his effort in the game thread embiggens us all.