*All results from games played on Friday, April 8th 2011

SYRACUSE 2, BUFFALO 3 (Box) RHP Jenrry Mejia posted six strong innings but his command was shakier than his line would have you think. With the Herd trailing in the eighth, LF Jason Pridie led off with a double and eventually scored on a DH Val Pascucci RBI double. The game went into the 13th when it was Pridie who once again played hero, singling and ultimately scoring the game-winning run on a wild pitch.

RAINED OUT - Makeup doubleheader on Saturday

For the second night in a row this one is going to the St. Lucie starter; RHP Jeurys Familia was flat out dominant and it's criminal that he didn't win this game. Familia has just as much arm strength as Harvey and if he can develop some of that polish, St. Lucie might lose both of these guys before the break. Honorable Mention to Jason Pridie for coming up big -- twice -- in Buffalo's extra-inning victory.

And of course the Goat of the Night, which belongs to St. Lucie's RHP Michael Powers for allowing 2 runs in the ninth and somehow allowing Familia's gem to go to waste.

So I figured we’d start the Prospect Spotlight series with one of the more interesting developments of early 2011, the scorching-hot spring performance of Fernando Martinez. After batting .364 with a homer, two doubles and most impressively five walks against just four strikeouts in 22 spring training ab’s, FMart was sent out to the minor league side of camp to prepare for an assignment to Buffalo. Collins, Alderson and co. (wisely) decided early on that regardless of performance Martinez would spend most, if not all, of the year catching up on lost time at Triple-A Buffalo.

This didn’t seem to bother Martinez as he just kept on ripping, batting well over .350 with three more homers in the final few weeks of spring training. In an interview with Bisons broadcaster Ben Wagner, FMart sounded extremely upbeat and didn’t show any signs of disappointment about the minor league assignment. Instead, he focused on how good he felt physically, "100 percent" for the first time in a couple years. Personally, walking by him a few times in the clubhouse during the spring, I was struck by how much bulk he’s added in the last couple years; forgive me but all I can think of is what Jerry called ‘man muscles’.

Fast forward to Opening Day out at Coca-Cola Field where Martinez wasted no time, going 4-for-5 with a double. As Toby Hyde pointed out yesterday, this was only his second career four-hit game as a pro, his first since 2006 as a seventeen year old in Low-A Hagerstown. And probably most impressive was the double, off a big, 12-to-6 curve from Nats’ pseudo-pitching prospect and 29-year old Cuban veteran Yuniesky Maya who is known for his quality secondary stuff. Martinez stayed back and ripped the offering deep into the right field corner; it was nice.

One more bit of commentary that I’ll add is something that I noticed while watching that game: His stance looks different. Not a monumental change, but I noticed it a couple times that he seems to be standing more upright than in the past, especially in the time leading up to his swing. The above image was from Thursday’s game while the below was from last August: 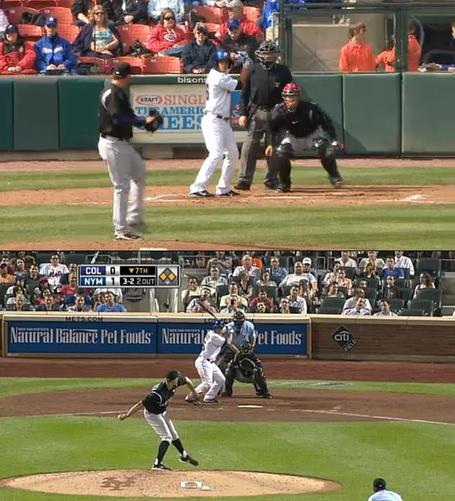 Now let me qualify this by saying that I hate these sorts of snapshot comparisons of swings or stances. The analysis of the most extreme minutiae relating to David Wright’s batting routine last season drove me nuts. So please take this with a grain of salt; just something that caught my eye. Either way, FMart is clearly seeing the ball well right now and is giving us a glimpse of what he’s capable of if only he can stay on the field.