Carlos Beltran, Vernon Wells and Why Pencils Have Erasers

Share All sharing options for: Carlos Beltran, Vernon Wells and Why Pencils Have Erasers

In early February reports surfaced about the initial rumblings of trade interest between the Angels and the Mets for the services of one Carlos Beltran. On the heels of Carl Crawford bolting for Boston, the Angels had some cash burning a hole in their pockets and a definite need for a proven impact bat. Beltran fit the description. However, as we all know Angels GM Tony Reagins took his business elsewhere as he decided to instead trade for an Albatross Blue Jay, namely Vernon Wells.

Since then, Carlos Beltran has been, well...Carlos Beltran -- at least offensively. As for Wells...let's just say things haven't been so peachy keen. In fact, thus far his season can most accurately be described as ineffectual, and that's putting it really nicely. Wells has been awful and to make matters worse he suffered a groin strain during last night's game and was immediately placed on the DL. 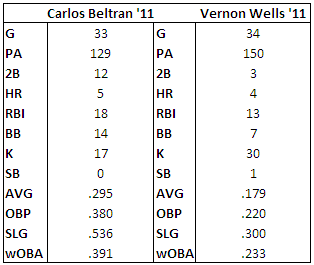 So do you think the Angels might want to take their mulligan on that one?

Now there was some justification about their decision-making. For one, they felt that at this stage of his career Wells was a much better option in center. Fair enough, but to this point Wells has logged just four games in center and shares an outfield with Torii Hunter and defensive wizard Peter Bourjos. In addition, there were concerns about the state of Beltran's health. Again, justified but only one of the two is currently on the DL and it ain't Beltran, who just broke a streak of 21 consecutive games started.

Honestly, I don't care about their decision to go with Wells over Beltran; chances are that Reagins and Sandy couldn't come to an agreement anyway. And Beltran's continued presence with the Mets represents either an integral piece of a playoff push or a valuable trade chip in a mid-season liquidation. Either way we're in good shape. I'm just curious about how Toronto's GM Alex Anthopolous conned Reagins into taking Wells and his remaining four years and $81M? Seriously, blackmail, voodoo, what?

Note: Reports that Reagins has called both the Mets and the Jays declaring that he had his fingers crossed and/or it was opposite day have not yet been verified.