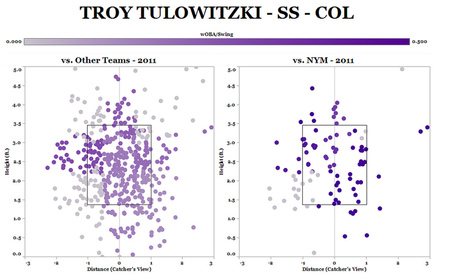 Troy Tulowitzki got off to a very hot start to 2011, posting a blistering 1.002 OPS through April. The Rockies' shortstop has cooled off a bit, but he's still sporting a .871 OPS, good for 24th in the NL and best among shortstops.

The funny thing is a significant portion of his success is due to the Mets' lack of pitching. So far this year, 38% of Tulowitzki's OPS is attributable to the Mets. If you decompose his OPS and remove the games he played against the blue and orange it drops to .665. An Amazin' Avenue reader posted this fanshot that further drives home the point (and inspired this post):

To get a better handle on this I took a look at Tulowitzki's Pitch F/X data and calculated wOBA per swing for pitches in nine locations. I further split the data by pitches thrown by the Mets and all other teams he has faced this year. The graphic above plots these splits side-by-side. (The methodology here is the same as a previous analysis I ran on Ike Davis.)

Pretty stunning. Mets pitchers have generally thrown Tulowitzki hittable pitches and, well, he has raked them them.

These are wOBA/swing (not plate appearance, swing) numbers by pitch location:

Now, the values are inflated due to the small sample size, but, um, wow.

Tulo's wOBA per swing is roughly .228 overall this year, but only .161 against non-Met pitchers. Against the Mets? He's posting a .576 wOBA with every swing. To put this in perspective, he's only taken 31 swings against the Mets and accumulated 29 total bases. Compare that to the 40 total bases on 159 swings against other opponents.

Tulowitzki has also managed to hit 17.6% of his fly balls out of the park. Against the Mets? That number jumps somewhere over 30%*. 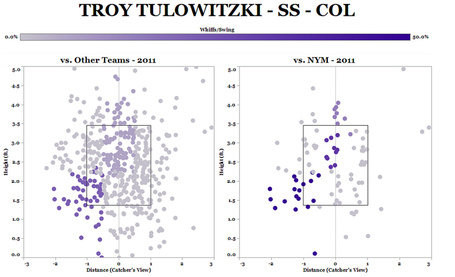 So, essentially, when Mets' pitcher attacked Tulo where he is weakest he performed as expected. But when Mets pitchers missed and left pitches in hittable zones, Tulowitzki made them pay big time. And, boy, have they missed this year.

*There can be coding differences between Pitch F/X data and other sites' batted ball data. Pitch F/X data has Tulo's HR/FB at 28%, so keep that in mind.