He may have just landed on the disabled list, but prior to his collision with David Wright, Ike Davis had gotten off to a very good start this year. If there's one flaw in his game this season it's his performance against left-handed pitching. At one of the games against the Los Angeles Dodgers last weekend at Citi Field, a friend asked what was going on with Ike against lefties. My short answer was that Ike didn't struggle against them in 2010 and would probably turn things around.

Any discussion about Ike's splits is one that involves a very small set of data. In 2010, he only accumulated 138 plate appearances against lefties, thanks in part to Jerry Manuel, and he's only had 50 so far this year. The best indication of Ike's true abilities against lefties is his career performance against them, but the distinction between this year and last makes for a good point of comparison to see what he might be doing differently. 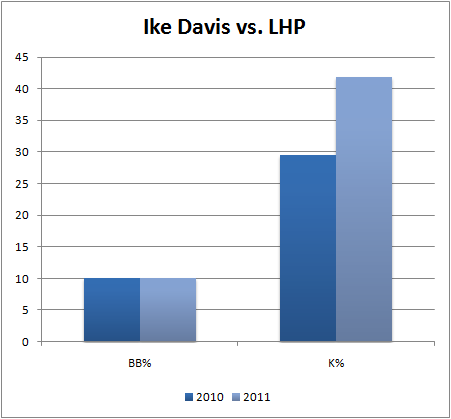 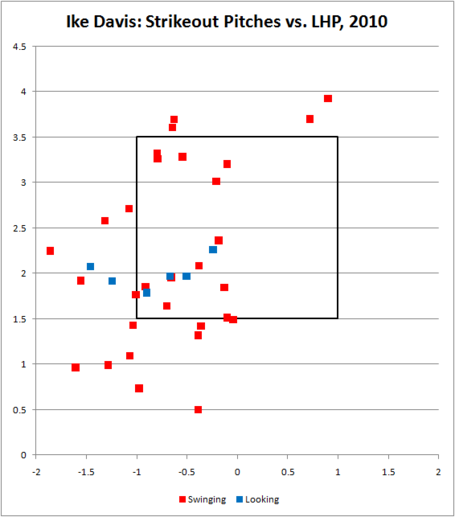 The pitches plotted above are just the third strikes from each of Davis' strikeouts against left-handed pitchers. Last year, Ike's strikeouts consisted heavily of swings-and-misses on low, outside pitches, whether they were in the strike zone or not. He hardly ever struck out looking in these situations, and he also struck out swinging on his fair share of pitches high in or above the strike zone. 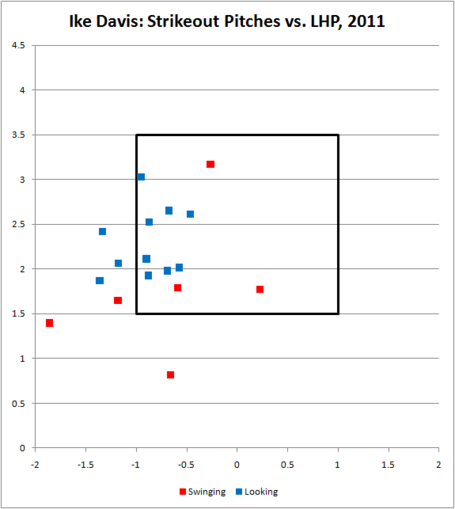 In the early going, Ike's not letting lefties strike him out by flailing at pitches out of the zone, but he's laying off pitches in the strike zone and striking out more frequently. Whether or not Davis will improve his K% will depend on whether he can spoil the pitches in the strike zone without returning to swinging and missing at pitches outside the zone.

Also, for what it's worth, a few of the called third strikes were very close and could have been called balls by the home plate umpire. A couple breaks on those pitches, and his K% would be better. 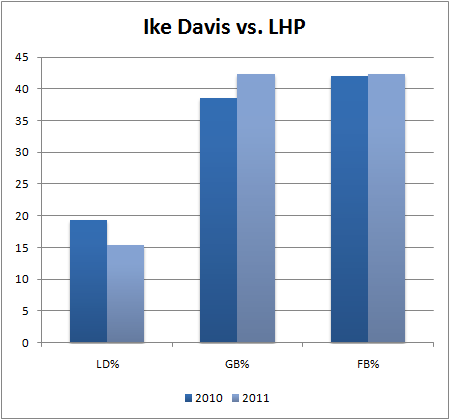 Hitting fewer line drives is going to have a significant impact on production, and in Ike's case, the grand majority of missing line drives have turned into grounders, the type of contact that's most likely to result in outs. 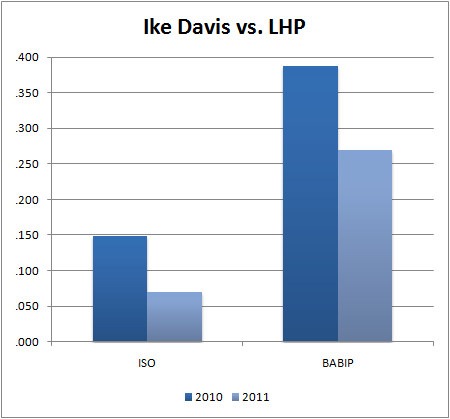 Given the batted ball types above, it's not surprising that Ike's power against lefties has been very low so far this year. The extra-base hits were there last year, but they haven't shown up yet in 2011.

What's very noticeable is Ike's BABIP from last season, a whopping .388. Even in the best case scenario, that's a number that was bound to come down. On the upside, the .269 mark this year is likely to go up.

In total, Davis is sporting a .321 wOBA against lefties in his still-young career. Even if that doesn't improve, that doesn't make Davis a complete liability when a lefty is on the mound for the opposing team.

My short answer from earlier, that Ike hit lefties well last year and should be fine, was too simple. While he did many things better last year, he also had luck on his side. There are plenty of opportunities for Davis to get better against lefties this year: cutting down the strikeouts, hitting a few more line drives, or encountering slightly better luck.

PitchF/X data from Joe Lefkowitz, and thanks to Bill Petti for his advice on those graphics.