Share All sharing options for: Mets wOBA By Position

Weighted on-base average ("wOBA") is the statistic I talk about at parties. Simultaneously useful and accessible, an advanced math degree is not required to understand and appreciate probably the best* publicly available offensive statistic. It correlates with run scoring better than batting average, on-base percentage, slugging percentage and OPS. Everything a batter does at the plate is factored in its calculation, as are stolen bases and caught stealings. The various outcomes are weighed based on run-scoring value. This is a great stat for saber-skeptics. wOBA recognizes that a walk isn't as good as a hit and efficient base stealers are credited for their achievements. The minor weaknesses of the triple slasher (BA/OBP/SLG) are assuaged.

Any aspiring True SABR in the audience should click here and here for the guts behind wOBA. For those who just want to know how fast the car can go and not how the engine works, understand that a wOBA at .300 or below is poor, .330 is around average, .380 is excellent and .400+ is elite. Just like on-base percentage.

*Baseball Prospectus's statistic True Average ("TAv") is similar to wOBA but is scaled to batting average. It is another leading statistic. I prefer wOBA, specifically the FanGraphs version, for various reasons. One of which is FanGraphs stats are easier to navigate. Note that FanGraphs wOBA is not park-adjusted. For an absolutely epic The Book Blog thread on wOBA vs. TAv, click here. 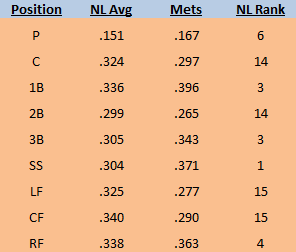