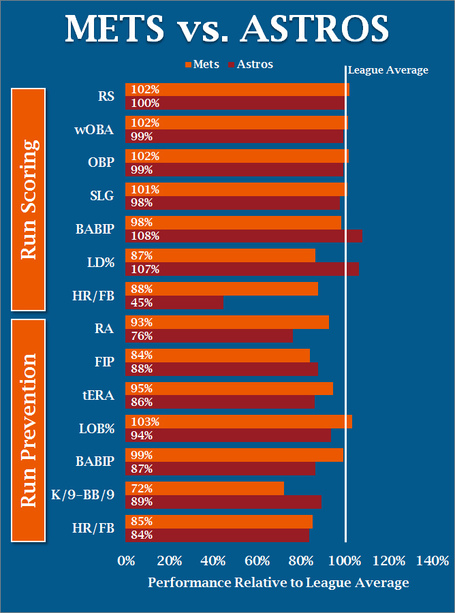 Following their series win and other worldly performance by that selfish Carlos Beltran yesterday, the Mets travel to Houston for a three-game series.

In the Astros, the Mets find a team that is similar to them offensively and--gasp--worse than them when it comes to pitching. (I know, I know, shocking).

Both teams have put up similar numbers offensively. The Astros have hit a lot more line drives than the Mets, leading them to an above-average BABIP. But the Mets have managed to make more of their fly balls, knocking 7.9% out of the park compared to only 5.7% for the Astros. To be fair, both teams are below league-average, but the Astros are really below.

Statstically, the Mets have had the better season thus far when it comes to preventing runs. As a staff, Mets' pitchers have only given up 7% more runs than the average NL staff, while the Astros have given up 24% more. The Mets have also stranded more runners and allowed an average BABIP against opponents. The Astros are sporting a 68.7% left-on-base percentage and, when combined with a .330 BABIP against it's not hard to see why they've given up almost a full run more per game than the Mets.

After facing Bud Norris tonight, the Mets face the likes of J.A. Happ and Aneury Rodriguez (who was just moved into the rotation). If they can steal a game against Norris they've got a great shot at a series sweep before heading home to face the Marlins and Nationals next week.

(Note: made some design changes. Let me know what you think)