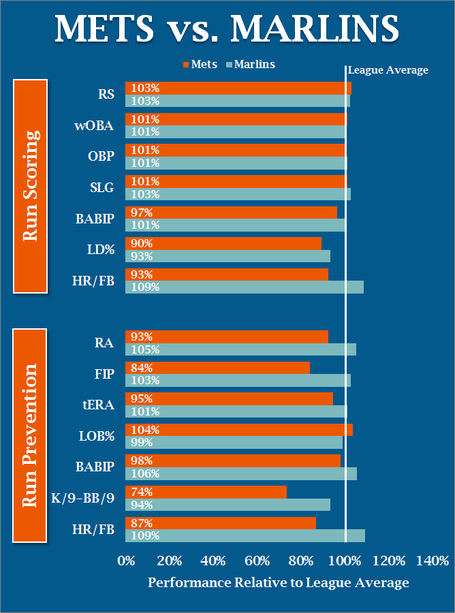 After dropping taking two of three from the Houston Astros, the Mets (19-21, 6.5 GB) return home tonight to open up a two-game series against the division rival Florida Marlins (23-16, 2GB).

The Marlins have had a tough go of it lately, going 4-6 over their last 10 games. The Mets have played better over that same stretch, posting a 7-3 record.

The Marlins have clearly performed better on the mound, despite getting basically nothing from Javier Vasquez. Lucky for the Marlins, the Mets won't get to face him this time around.

The Mets counter with Mike Pelfrey and Jon Niese. Pelfrey has had an awful year, but has pitched better of late. Yes, he gave up three home runs in Colorado last time out, but they were all solo shots. Additionally, Colorado has a great HR/FB ratio, particularly at home (12%--5th in the NL). What was more encouraging was that Pelfrey was limiting baserunners (one walk, three non-HR hits).

Niese, on the other hand, pitched well in his previous four starts up until his last start against Colorado. For some reason, Niese has walked almost twice as many hitters at home versus on the road this year (4.47 BB/9 vs. 2.28 BB/9--in four home starts this year he's only walked less than three batters once). If we see the low-walk Neise on Tuesday that becomes a more winnable game for the Mets.

Once again, the Mets stack up well against their opponent offensively, but must overcome two hurdles--solid starting pitching from the other team and clearly deficient pitching from their own staff. I, for one, would be overjoyed with a split here before hosting the Nationals on Wednesday and Thursday.