Marlins 2, Mets 1: Alright, Pick Out Somebody You Want to Punch

Share All sharing options for: Marlins 2, Mets 1: Alright, Pick Out Somebody You Want to Punch

The early part of this game featured some heroic at bats by Rusty Staub and close shots of cute freckle -faced kids talking about how much they love the Mets...I'm sorry, that was Mets Yearbook. After today's news about David Wright, you can't blame a man for wallowing in faded technicolor memories of yesteryear.

A hasty rain delay was called mere moments before game time, and the contest did not get going until 8:30. Not much got going after that, either. Josh Johnson clearly was not his usual, otherworldly self, but he was good enough to keep the Mets off the board for the first few innings. Meanwhile, Mike Pelfrey took full advantage of spacious CitiField, some stellar defense, and the opposition's impatient bats to limit the Marlins to three hits through six. It was the kind of outing that looks better in the boxscore than it did live. Were it not for a pair of amazing plays by Carlos Beltran and Willie Harris (not a typo), the results could have been much uglier.

The Mets struck first in the fourth inning, despite an aborted rally when Jason Bay was caught stealing to negate a lucky infield single. To make up for it, Dan Murphy snuck a hit through first and second, advanced to second when Josh Johnson bounced a pitch in the dirt, and scored on a Justin Turner double to the right-center gap.

Another scoring opportunity presented itself in the fifth on a Jose Reyes single, a stolen base, and a ball hit by Carlos Beltran that caromed off of Johnson's throwing arm and went for a fortunate hit. Johnson wriggled off the hook by striking out a completely overmatched Bay and getting Murphy to ground out, but the blow to his arm (later diagnosed as a contusion) knocked him out of the game. He gave way to Edward Mujica, who set down the Mets in order in the sixth

Florida tied the game at one on a moonshot off the bat of Mike Stanton to lead off the top of the seventh, a bomb that landed well above the home run apple in straight-away center. ("Ike Davis territory," Gary Cohen called it.) Two one-out singles put runners on the corners and gave the Marlins a golden opportunity to take the lead, but an anxious Chris Coghlan popped up the first pitch he saw, and Pelfrey got a groundball from Hanley Ramirez (one of the few he induced all game) to end the threat.

That brought us into a bullpen-off. Mike Dunn pitched the bottom of the seventh and eighth innings, striking out the first five batters to face him and barely breaking a sweat in the effort. Tim Byrdak and Jason Isringhausen kept the Marlins off the board in the top of the eighth, as Izzy lulled Stanton to sleep with his curveball.

Frankie Rodriguez started things off with a bang in the top of the ninth by hitting John Buck. After a sac bunt and a strikeout of Emilion Bonifacio, the Mets made the curious decision to walk Chris Coghlan and face Ramirez instead, a player who, no matter what he might be hitting against other teams, always seems to kill the Mets when it hurts the most. Whether wisdom or foolishness, the strategy worked , as once again Ramirez ground out to end a threat.

The Mets did their absolute best to lose the game in the ninth and tenth innings. First, Turner led off with a chopper past the mound that Ramirez barehanded and flung into the dugout. But Jason Pridie failed to get a bunt down, Josh Thole was intentionally walked and pinch hitter Fernando Martinez hit into a fielder's choice. After another intentional walk to Jose Reyes, the Marlins brought in veteran lefty Randy Choate to face Willie Harris. For some reason, Terry Collins countered with Chin-lung Hu, the only bat more useless than Harris's, and he swung at the first pitch he saw for an inning-ending groundout.

Then, after Mike O'Connor retired the Marlins in order in the top of the tenth, Carlos Beltran led off the bottom half with a walk. Jason Bay became the highest paid bunter ever when he laid one down to move Beltran over. An intentional walk to Daniel Murphy brought up hero of the hour Justin Turner, who hit a sharp grounder that bounced off of Ramierz's shoulder. Unfortunately, the ball then arced perfectly to the second baseman in time for Florida to turn an improbable inning-ending double play. In an evening of miserable omens for the Mets, this was the biggest "ruh-roh" moment.

In the top of the eleventh, Ryota Igarashi put two men on with two out to bring up the pitcher's spot. For some insane reason, the Marlins opted to let reliever Burke Badenhop hit for himself, a pitcher who hadn't had a major league at bat in two years. Naturally, Igarashi not only went full to Badenhop, but allowed a bouncer up the middle to drive in the go-ahead run, because of course he did.

Leo Nunez got the first two outs in the bottom of the eleventh before a depleted Mets bench forced Terry Collins to pinch hit with starter Jonathan Niese, who had a tough at bat before clubbing a triple just out of the reach of the center fielder. But Jose Reyes struck out to end the game and complete yet another kick-in-the-bathroom-area loss a the hands of the Marlins, easily the worst franchise in all of sports. Sorry, the pain is still fresh.

Who do I want to punch? Igarashi, I think, or at least his ticket on the next train out of town. My second choice would be Collins for all of the idiotic decisions he made in the ninth and tenth innings; namely, batting Hu and making Bay bunt in huge situations, neither of which are acceptable or excusable. If Wright is headed for the DL--and all signs point that way right now--I fear many more punchless, soul-crushing defeats such as these.

Full recap on its way.

K counter to come. Your patience is appreciated. 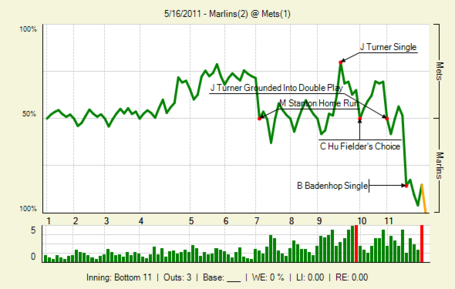