Citi Field Food: A Taste Of The Citi

Share All sharing options for: Citi Field Food: A Taste Of The Citi 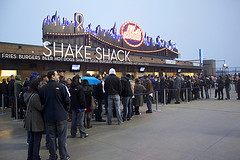 Last night I took part in a culinary adventure down at Citi Field, yet another in a series of increasingly frequent, increasingly interesting blogger events held by the Mets. This time we were taken on a guided tour of the ballpark and it's myriad dining options, led by one of the head honchos of the Met's food management company Aramark named Scott [can't remember last name].

A small group of us braved the truly crappy conditions and embraced our inner foodies, trying many of the newest, tastiest offerings in every corner of the stadium, from rolling carts to upscale clubs, seafood to sandwiches (eat your heart out Berg!). And anyone who knows me also knows these three things: That I can be bought off with food. that I share my opinions far too freely and that I rarely waste an opportunity to make a pig out of myself.

Put it all together and what do you got? Your guide to some of the newest baseball eats out at Citi Field, complete with ratings, photos AND video -- because frankly who doesn't want to watch video of someone else eating?

So I don't think I have to explain how these ratings will work other than the fact that each option will be rated based on -- what else -- the hot dog. What better than the timeless, ballpark standby to measure each of these newfangled whatsits? Now let's get started with Citi Field's de facto seafood eatery, NYC seafood authority Dave Pasternack's Catch of the Day: 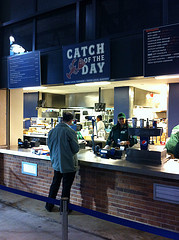 Honestly, who doesn't love popcorn shrimp? Well apparently a few people in our party, which subsequently left me with a basket and a half to myself. Now I knew that I had to pace myself so early on our trek but far better men than I have crumbled before such tests. And honestly, I'm not at a point in my life right now where I turn down free popcorn shrimp (I hope to never reach said point).

As for the shrimp themselves, very good. It's always easy to tell fresh seafood from not and fortunately this was the former. Frying up only a few pieces at a time also made for nice, round, crispy shrimp and you certainly can't complain about the easy eatability of a basket of veritable finger food. Overall, typical higher price of seafood aside, very nice option, though could use a couple of dipping sauces to spice things up a bit by the bottom of the basket. Three Dogs

Once again, fresh shrimp will make any dish and plumper, jumbo shrimp did just that for this spicy sandwich. For those that like their meat blackened, this one's for you but be warned, the liberally applied spicy mustard sauce will clear your sinuses. GET A DRINK. I actually had to wipe my eyes after getting a full bite that resembled a shot of horseradish but I'm into that sort of thing. Also, the ciabatta roll is always a nice option for holding together a messy sandwich. Again, priciness aside, very strong option. Four Dogs

On to a hometown favorite, Cascarino's of College Point: 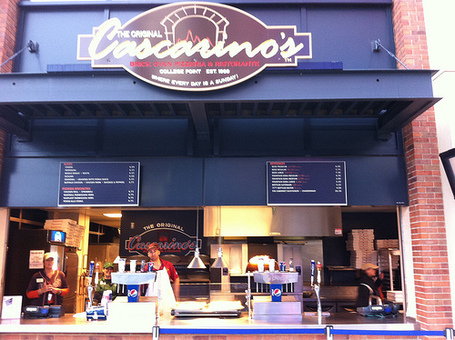 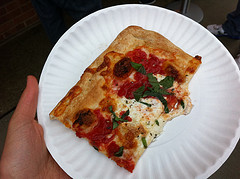 Our host/tour guide from Aramark, Scott, stressed that every single offering that they serve should be strong enough to thrive out in the real world as well as the confined bubble of the stadium. Well I must say that if they made pizza like this in Stamford I'd have a new daily lunch place. As you can see in the above photo, each pie is fire-grilled and if you're a thin crust aficionado like me, this is the good stuff. Pizza is always a good bet as far as eatability at the game and this one is no exception. My only complaint is that the slice could have been just a little larger -- this is New York after all. Otherwise, another strong option. Four Dogs

Then to one of my favorites on a summer day out at Citi, Danny Meyer's -- of Shake Shack fame -- Blue Smoke: 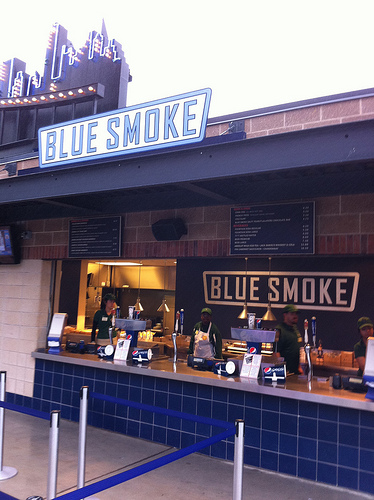 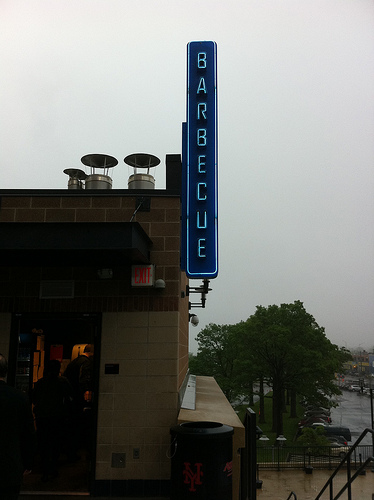 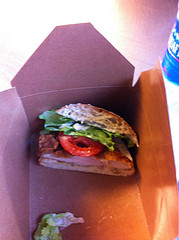 I'm a sucker for BBQ so naturally I love Blue Smoke, but Meyer's displayed some of his non-BBQ, Southern roots with this new offering. Fried chicken is too often greasy but this sandwich certainly was not. Definitely not a bad bet if you're not into the crazier stuff, but I must say that I found it a little bland. Could have used a slice or two of swiss. Maybe it's because I'm not a huge fan of the chicken sandwich as a whole but I felt this one was just eh. Two Dogs

We skipped the Box Frites today but I have to mention that these fries are incredible; they must dump a pound of sugar into the fryer or something because they're a unique blend of salty and sweet. Incidentally they're like crack for my fiancee. 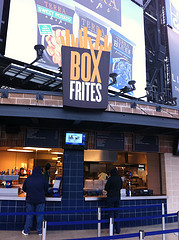 Skipped both of these stops as well, though i must say that the Chicken Taco is BY FAR the most underrated option in the entire stadium. 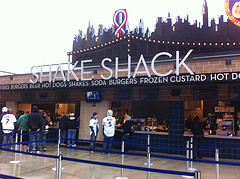 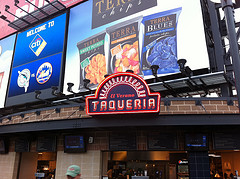 The next stop was the newest addition, Keith's Grill, where I unbuttoned my pants and happily supped on a Mex Burger: 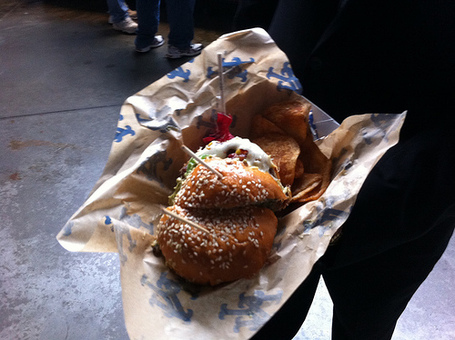 Apparently Keith was the mastermind of the alternate Gold Glove Burger more so than the Mex but no matter, as Scott told us Keith's secret ingredient of choice? 'More ketchup.' Fortunately the Mex had a lot more than just ketchup.

It featured a thick burger topped with bacon, pepper jack cheese, chipotle sauce, guacamole and jalapenos all on a sesame seed bun. Each ingredient was seemingly hand-picked from my list of secret weaknesses but I must say that in this case, less may have been more. Any of the toppings on their own would have been great but all together they kind of crowded each other so that none of them really stood out. The kettle chips were kettle chips, good but nothing ground-breaking. The Tootsie Pop is a damn nice touch though. All in all, I can overlook the extreme messiness because the burger was solid, but I was expecting greatness and received something less. Three Dogs

Next was a call-up last season that earned it's way into the everyday lineup this year: 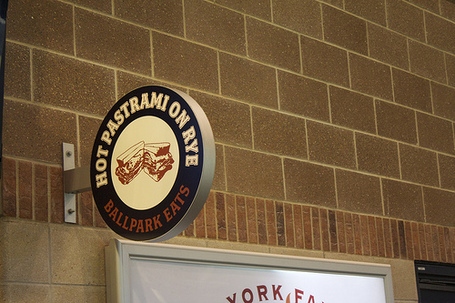 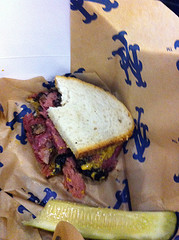 Simple. Unassuming. Great. It was interesting to hear how they test-run new creations around the ballpark and those that garner enough attention find full-time homes. This is the story of the Pastrami station in the Promenade level beyond left field, where there is a full-time carver on-site to hand carve each sandwich (video below).

Also, it should be noted that I'm a pastrami junky so it isn't surprising that this sandwich scratched me right where I itched. Nothing too out there, just very tender, good cuts of Pastrami with traditional spicy deli mustard on fresh rye bread. And thank god they remembered the pickle, nothing complements a good deli sandwich like the presence of a crunchy dill. I'll be back for my next visit. Five Dogs

The always underrated Knish, another nice complement that made this stop truly New York. 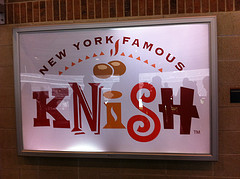 Based on smell alone it's still hard to argue with this oldie but goodie, a Shea original, the grilled sausage. 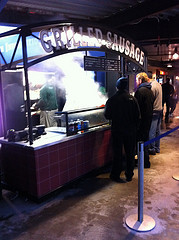 Then it was on to the private clubs where the blood was a little bluer, but beyond the wine carafes and white anchovies, the most popular orders are still Nathan's hot dogs and chicken wings. Ah new money, how you betray yourself. 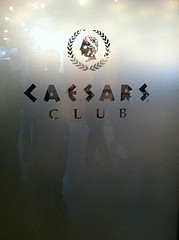 Now that is a good-looking spread. 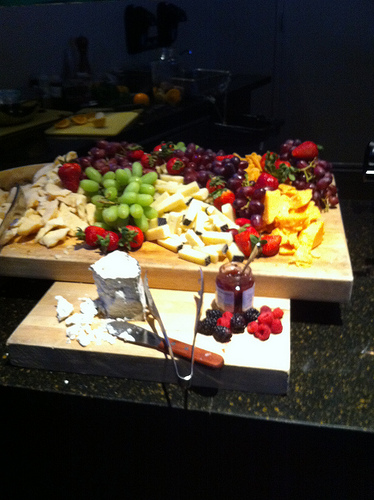 I just felt this was strange and had to share. 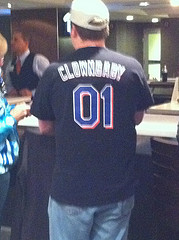 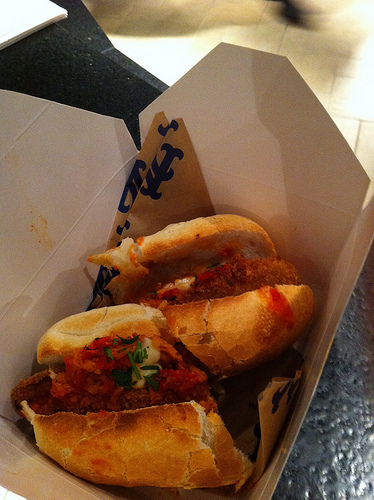 A number of times Scott pointed out that the best compliment he can receive is to hear a diner say 'That was really good', without adding '...for ballpark food.' This was another option that fit that bill. Apparently this sandwich was the result of a great deal of trial and error as the chefs wanted to get away from the prototypical parm sandwich model of tasty, yet extremely heavy. There's a time and a place for the traditional gut-buster, as it were, but that time is not when you're out and about at Citi Field on a hot summer day.

After numerous tries I would say they succeeded in creating a rather light but still satisfying eggplant sandwich. The tomatos and tomato sauce on all of the dishes stood out as extremely fresh, apparently coming direct from a local farm in central Jersey. And the crisp italian bread was a perfect fit. Timing was an issue with everything, but with these sandwiches especially as they rarely spend more than 60 seconds off the grill before they're served and it shows. Four Dogs

The official napkin of Jeff Francoeur. 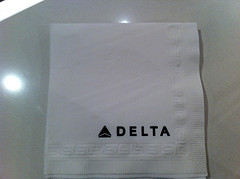 Citi Field's Executive Chef Robert Flowers talks about working with the Mets. The theme of the day was the Mets' apparent decision to stray from the well-trodden path of sports facilities to choose their partners and offerings based on revenue. As each of knows all too well, stadiums typically serve the cheapest, easiest, most mass-appreciated lowest common denominators because that's what's cost effective.

Instead, the Mets -- and Aramark -- want to drive revenue in the same way that any worthwhile fine dining establishment does, by satisfying the customer with a unique, quality meal that they'll want to come back for again and again. This is a mentality that has been tested in many sports facilities but seemingly never on the scale of Citi. 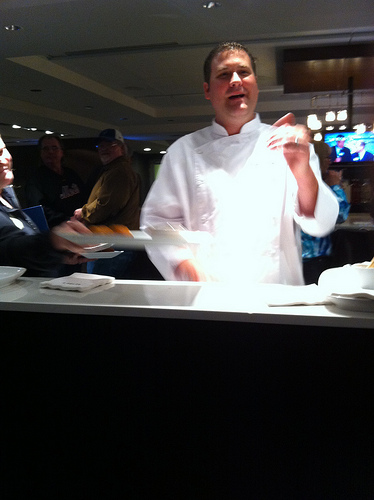 Class out the ass. 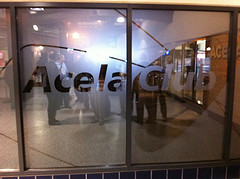 Below is the seasonal menu for the resturant in the Acela Club (the one behind the glass) which you can click to embiggen: 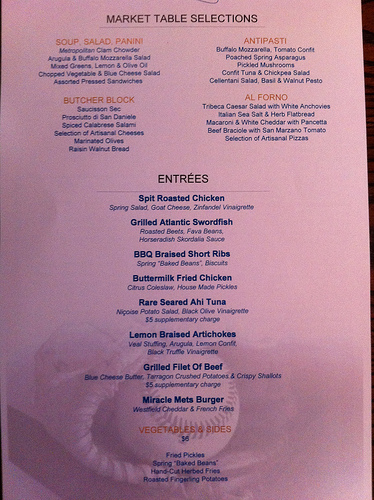 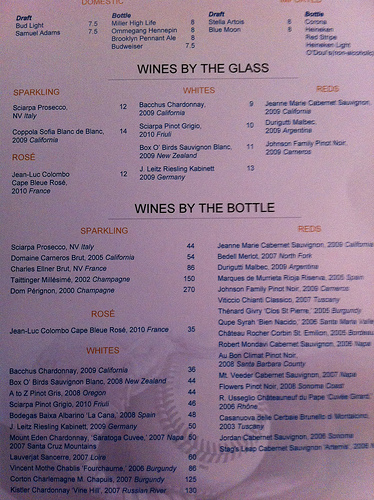 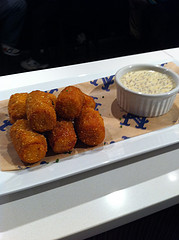 As I mentioned, even in the upscale luxury clubs people still want their old favorites. However, apparently it helps if those old favorites are served under the guise of haute cuisine and that's what was going on here. These bites were basically a five-star restaurant's take on pigs in a blanket, battered in a crunchy panko breading and served with a mustard relish sauce. Scott said that probably the hardest job the chefs have is not the fancy, complex entrees or anything like that but re-inventing hot dog dishes. They created a decent little snack here but ultimately, a weenie is a weenie. Two Dogs

And for dessert no shortage of fresh baked pastries. 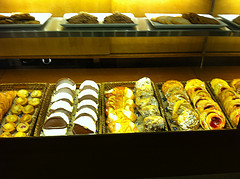 So that was it. Quite a one-hour whirlwind tour of some of the stadium's latest and greatest dining options. Thanks to those in the Mets Media Relations department for putting such an interesting little event together. Hopefully this will help those of you out there who are like me, that wander through Citi's many concourses overwhelmed by the multitude of options before you. If not, well at least I got a hell of a lot of free food out of it, and after all isn't that the most important thing?

No word yet regarding a tour de beer.

PS - Yes I ate -- and finished! -- all eight of the rated offerings within the hour-long tour. And yes, that noise that scared my dog around 2am this morning was me rummaging through the bathroom in search of the Pepto Bismol.