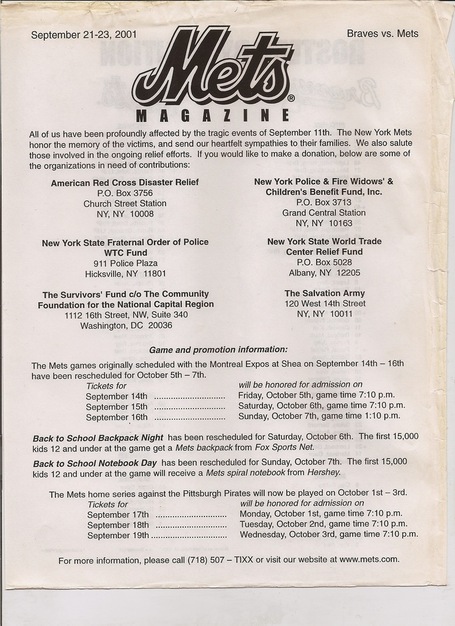 This insert was put into programs sold at Shea Stadium for the series against the Braves for September 21-23, 2001. My copy comes from a program purchased for the game on September 21, the first professional sports game of note played within New York City after the terrorist attacks of September 11. The Mets trailed 2-1 until Mike Piazza belted a two-run homer to the camera stand in straightaway center field in the bottom of the eighth, then held on for a 3-2 win. It remains the best game I've ever seen in person, for reasons that should be obvious.

Note the rescheduled series information, informing ticket holders when these games would be played. MLB took a break of almost a week after 9/11, and the Mets played their first games thereafter in Pittsburgh before returning to Flushing to take on the Braves. In the interim, Shea Stadium was used as a staging area and campsite for first responders and supplies. Many Mets, particularly manager Bobby Valentine, assisted in that effort.

When the Mets returned on September 21, the mood was uneasy. It was far from a sellout. I sat in the upper deck, which was sparsely populated. I wouldn't have been there at all, had I not been invited by my brother, who'd had tickets for this game through a group at his college for weeks beforehand. People were still very nervous about leaving their houses and gathering in large groups. Every day brought another weird rumor of terrorist plots, none of which could be easily dismissed in the new world we found ourselves in.

Being there for Piazza's homer, I don't want to call it a thrill. And I don't want to say it was cathartic, or that it helped me deal with anything in any real way. I do know that as I watched Piazza's ball sail deep into the night, realizing what it meant for that game in that particular moment, I thought to myself, I needed to see this now.

Outside of Mets fans, few remember the event or how significant it was. Ken Burns' Tenth Inning installment of his baseball documentary focused exclusively on the Yankees in the 2001 playoffs, and President Bush's perfect strike to home plate. Even Bobby Valentine, in the ESPN broadcast booth for last night's Mets-Phillies game as the news of Osama bin Laden's death broke, made no mention of the Mets' very real role in the immediate aftermath of September 11 (at least none I heard; I was admittedly tuned to the news for quite a while). Perhaps because, for once, he exercised discretion and thought it unwise to retroactively toot his own horn on such an occasion.

I stayed up far too long last night (though I doubt I could have slept anyway) to wait out the rest of the game. When another Ronnie Paulino knocked in the go-ahead run in the top of the 14th, it made for a perfect symmetry. Two Mets catchers, separated by almost 10 years, bookending this awful era.

Here's the scorecard. I neglected to add up Armando Benitez's final line. I hope you'll understand. 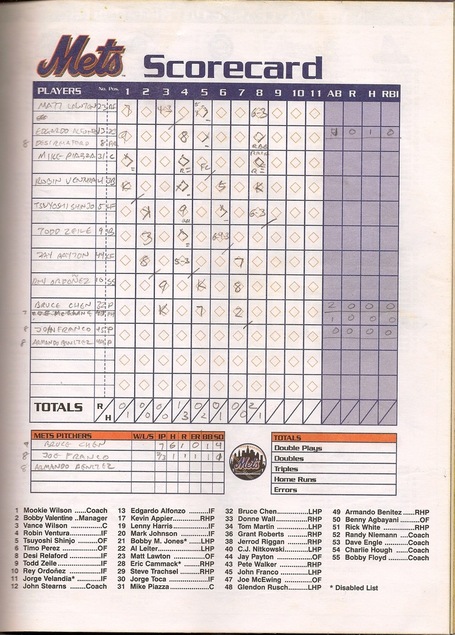