The Three Fallacies of Jose Reyes

Share All sharing options for: The Three Fallacies of Jose Reyes

As the 'Jose Reyes is as good as gone' hooplah has ramped up of late I've noticed a number of recurring sentiments resonating from the pro-trade camp which have bugged me. Three in particular (below) really got my goat, and I finally had it up to here when I began hearing even reasonably smart people repeating them. So I decided to shine the blogger spotlight on these shadowy matters and see if I couldn't set some things straight.

The insinuation here being that as his next contract inevitably takes him past his physical prime, he will inexorably lose that trademark Pep that makes him the Jose that we all know and love. And I'm not here to argue that fact because the percentage of base-stealers who maintain their speed past 30 and beyond is depressingly slim.

What I'm here to argue is that even if the guy suffers a Shaun Livingston-grade leg injury and subsequently resembles Ramon 'King Hippo' Castro on the basepaths, he'll still be extremely valuable.

To bring this fallacy down we'll simply look solely at the offensive output he derives with a bat in his hand, ignoring the steals. Here are the top ten shortstops in baseball as measured by OPS since 2006* (click image to embiggen): 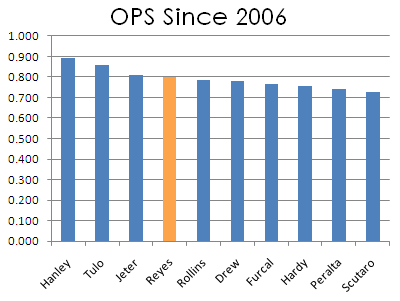 Pretty damn good. However, right about now I'm betting a smart guy like you is saying 'But Rob his speed boosts those numbers. On the on-base side through infield hits and on the slugging side through extra bases, namely doubles becoming triples.' Well if you said that, you're right. But as the author of this post I'm one step ahead of you there.

The most effective/fairest way to neutralize the value of his speed is to basically assume Reyes has the speed of a statistically average player. Chances are he'll always be faster than that but hey, he could also suffer further leg injuries and be slower so average it is. And in order to do that we must equalize his affected stats, again infield hits and triples (doubles might fit in there too but it'd be a pointless guessing game deciding which doubles were stand-up and which were singles that he extended with his speed).

So in terms of the actual numbers, we must average the total number of triples and infield hits in all of baseball (I used 2010 totals for ease, much more would have turned this task into a beast). Next we must assume that Reyes reached those median totals then stopped; any additional infield hits he garnered will become outs and any additional triples will become doubles. And lucky for you I've crunched those numbers, figured his new, speed-restricted OPS and here are the results: 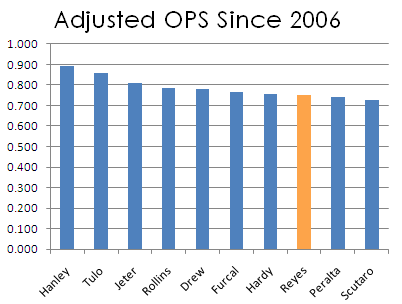 Obviously, his speed does help him in terms of his OPS but you know what? If he somehow lost nearly all of his speed he'd still be a top ten shortstop, offensively. Plus, he's behind a couple of guys who also benefit from their speed -- Rollins and Furcal -- and will likely regress too, but we're only concerned with Reyes in a vacuum. So considering the slim chances that he's ever that slow I find that kind of re-assuring, especially when you consider the stark drop-off in offense at the position after the top ten.

What we've come to find here is that despite the significant value that Reyes does derive from his legs, he's a damn good hitter, speed or not. Still think 'Jose's one true value is his speed'? That dog won't hunt monsignor.

It seems that any discussion regarding Reyes' future revolves around health and after the last year+, that's fair. Jose has experienced his fair share of injuries and I'm not here to dispute that. However, the trend with casual sports fans -- thanks in no small part to the MSM -- is to hyperbolize these kinds of things. Tthe more we hear it, the more we further the hyperbole until it reaches the point that Jose is actually running on two prosthetic legs and his thyroid is about to explode.

Again, I'm not saying the guy is some sort of Hierro Caballo (patent pending) but he's not in the class of a JD Drew or Fernando Martinez like many would have you think. Exhibit A being his four-year stretch from 2005-2008: Jose played in 161, 153, 160 and 159 games during that run. That's 633 total, 158 on average. It's also the fourth highest total in all of baseball. Obviously that's not his entire career, it's just four years but forgive me for thinking that a stretch like that precludes anyone from so haphazardly garnering the label 'injury-prone'.

But let's discuss the rest of his career. Obviously he's missed time, especially in the last year and a half. His hamstring tendon and calf issues shelved him for nearly a calendar year between 2009 and 2010. A rogue thyroid tacked on a few more weeks.

In the past 5+ years since his first full season Jose has logged 682 games out of a possible 851; in percentages that's 19.86% of games that he has missed. Here's how those figures look against some of his contemporaries: 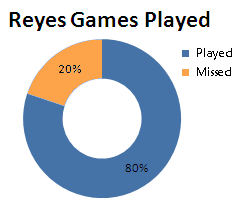 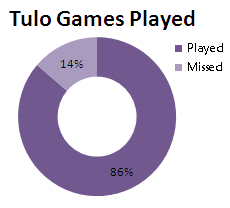 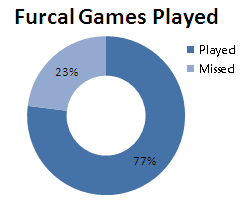 He's obviously no Hanley (6.35%) but he's certainly not in a different injury stratosphere than guys like Tulo or Furcal, both of whom regularly put up 4+ WAR seasons.

I'm not saying that health isn't a concern for Reyes because it is. But not significantlly more so than many other players of his ilk. Yes he suffered a severe injury in the past year and a half, but just look at that situation on the surface:

He hurt his leg in a game on a west coast trip in '09...Back in the free-wheelin' Omar days management didn't bring him home and had no qualms tossing him right back out there on the advice of a competitor...He subsequently hurt it worse...Even then, management allows him to keep playing under the bulletproof logic that he must only use one leg swinging right-handed...This time he severely aggravates it and that was that.

Is it really that crazy to presume that handled in a logical, capable manner the whole episode could have been avoided? Or at the very least minimized? And that perhaps it wasn't Reyes' congenitally weak legs to blame, but instead the lack of foresight by a know-nothing group of men parading as 'management'? And most importantly that his stellar early season performance thus far seems to indicate that this issue is in the past?

Fallacy #3: Jose Reyes doesn't get on base enough

Well here's the thing, that one is kind of true. Despite a very solid OBP this season, maintaining an on-base average worthy of a top leadoff hitter has always been something of a white whale for Reyes. However, here's the other thing, why does that matter?

'Come on Rob, that's baseball 101', right? Obviously that matters because if you're not on base--all together now--you can't score. And as important as the defensive side is, ultimately scoring runs is what it's all about for a position player, more so for a leadoff hitter. And in this modern climate of ever-advancing baseball acumen, Scoring Runz is synonymous with Getting On-Base. It's like a word association game: red stop. puppy happy, OBP runs. (Yes, puppies make me happy, so what?)

However, my question is are we losing the forest for the trees a bit here? The on-base aspect is the means, not the end. So what if he can reach that end without using those means? Don't misunderstand me, I'm not saying he can somehow score without getting on base, but what if Reyes can actually score runs at a desirable rate without a desirable on-base percentage? 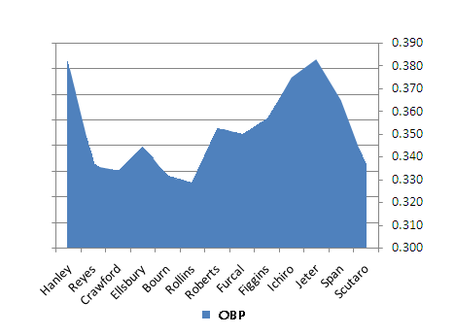 So as you can see above, Reyes doesn't fare all that well in the on-base department when compared with other premium leadoff-style hitters around the league (by the way all of these numbers are career totals). But once again, we're more concerned with how often he scores, or his Scoring Percentage. This is defined simply by Plate Appearances / Runs; also I just invented it right now. Here is how that same group of leadoff hitters fares (again, career):

Obviously Reyes fares much better this time, regardless of low OBP totals. But once again, you're a smart guy, so right now you're muttering about how this new stat isn't completely telling, as a player -- let's say Derek Jeter -- can benefit from a powerful lineup or smaller ballpark and look a lot better than he really is.  And vice versa.

So we've got to come up with a way to measure the effectiveness of a leadoff hitter to score without contaminating the matter with the park or lineup he plays in. Once again, as the author of this post I've gone ahead and done that. It occurred to me that while it's important for a leadoff hitter to get on base, the very most he can do is either score or get into scoring position.

Localizing this experiment to the Mets situation, getting on first and then waiting for the 2-run bomb probably isn't the best strategy. Not at Citi Field, not with the Mets long-term general lack of home run pop. And in general, is that really the most effective test of leadoff skills?

So instead of looking at Scoring Percentage, let's look at Scoring Position Percentage. That is, the percentage of his plate appearances that a player either scores or reaches second or third on his own merits (again, just invented it so it's defined PA's / 2B + 3B + HR + SB - 3SB). No advancing on sacrifices or wild pitches and stealing third doesn't count as the player is already in scoring position. So now let's take a look at those results: 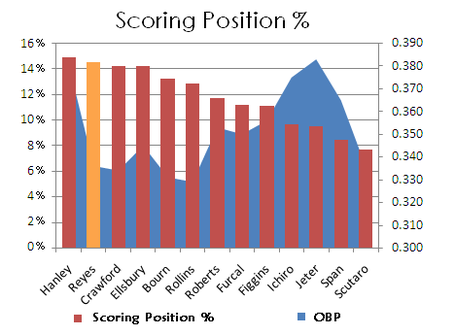 Obviously Jose fares very well by this measure; beyond Hanley -- who doesn't leadoff anymore anyway -- he's tops. The visual shows that though he reaches base only around 33% of the time, over half of those trips include a stop at second or third. Meanwhile someone like Derek Jeter or Ichiro reaches a lot more but only advances into scoring position in less than a third of their trips.

Now that may seem surprising but it shouldn't, especially not for anyone who watches Reyes on a regular basis (See: "Reyes' Run"). This comes as a result of his rare mix of good power and great speed. So while others may be better at just getting on base, Jose can advance past first with the best of them. Maybe some of that has to do with managerial philosophy or playing to one's stadium but once again, the Mets reside in a huge park so for them this is a valuable indicator.

Again, it'd be great if he could get on base more but thanks to an increased potency when he does reach and a higher scoring probability as a result, neither we as a fanbase nor Sandy Alderson as an evaluator can really kill him if he doesn't.

Jose's dreads are sweet. Or are they...? 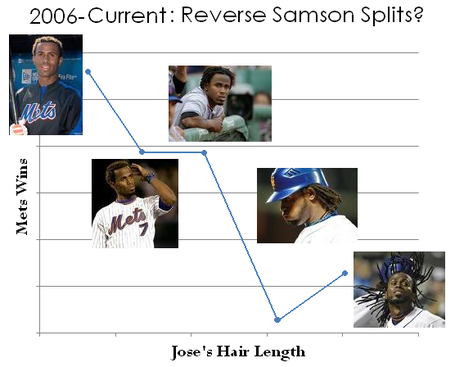 Time to chop them off? You decide.