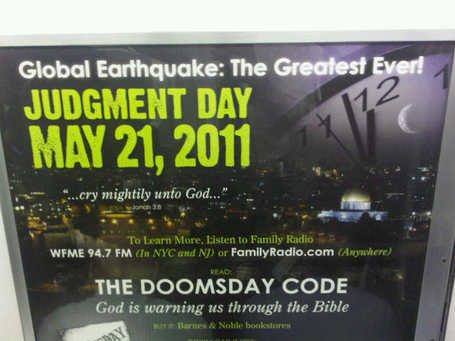 This is bad news for the Mets, as it likely means Derek "Past A Swinging" Jeter will [Redacted: no more religion. But if you believe this stuff and are reading Amazin' Avenue the day before The Rapture maybe you should check your priorities].

Fortunately, the Yankees' two best starters, CC Sabathia and Bartolo Colon, pitched the last two games and will not face the Metsies. Here are the matchups:

The Yankees are managed by former big league catcher Georgia Roddy. Their pitching coach is Larry Rothschild, who previously managed the Tampa Bay Rays and also appeared in seven games for the Detroit Tigers in the early 1980s. Now a look at the Yanks' starters:

Garcia's favorite apocalyptic song: "When The Man Comes Around" by Johnny Cash

What's the story? Soft-tossing Garcia made the Yankees out of spring training after signing a minor league deal. He has been a pleasant surprise considering his price, pitching to a 3.22 ERA and 3.86 xFIP in 36.1 innings. Given his underwhelming mid-to-high 80s fastball, Garcia has turned to various other off-speed pitches to get batters out. He has thrown his fastball just 36.4% of the time this season. Compare to Burnett's 61.5%. The Mets need to be patient and not offer at Garcia's slop off the plate. Get ahead in counts and sit on meatballs. I suppose the last two bits of advice can be offered about most pitchers though. Hard-hittin' analysis.

Against the Mets: Garcia has made two starts against the Mets. He pitched a complete game, seven-strikeout gem in a 13-1 Mariners romp at Shea Stadium in 2003. His second effort, as a Phillie in April 2007, was less successful. He lasted just 4.2 innings, allowing 3 runs in a 8-1 Mets victory. Moises Alou hit two home runs in that game.

What's the story? Former Met farmhand Burnett is in year 3 of a 5-year, $82.5 million contract which overvalues him. After a respectable 2009 campaign, his strikeouts have decreased and his home runs allowed have increased. His best years are behind him but he is still capable of throwing a gem. This season, he has a 3.99 ERA with 42 strikeouts and 19 walks in 56.1 innings. He also leads the league in wild pitches, with eight. Burnett can still dial it up -- his fastball velocity tops out around 94 and sits in the low 90s. A curveball is his main secondary pitch, though he also features a changeup. He always looks like he is smelling something awful.

What's the story? The 24 year-old Nova was serviceable in late 2010 and won a job in the rotation out of spring training. There's something hilarious about the Yankees having a scrap heap competition for multiple rotation spots. Nova is a sorta groundball pitcher with poor peripherals otherwise. He has a 4.33 ERA in 43.2 innings this season with just 24 strikeouts. Having watched several of his starts this season, it seems like he has struggled the deeper he goes into a game. The numbers support this perception. Nova is a fastball-curveball-changeup pitcher with low-to-mid 90s heat.

Against the Mets: Nova has never faced the Mets.

Overall outlook: The Mets will take two of three from the Yanks and reach .500. Dickey will pitch well a year and a day after making his Mets debut. Sunday will be a slugfest.

The weekend will come and go just like any other. This is an excuse to celebrate like it's Doomsday. Thank you to the prognosticators for picking a Saturday. Mets 'til the world ends.