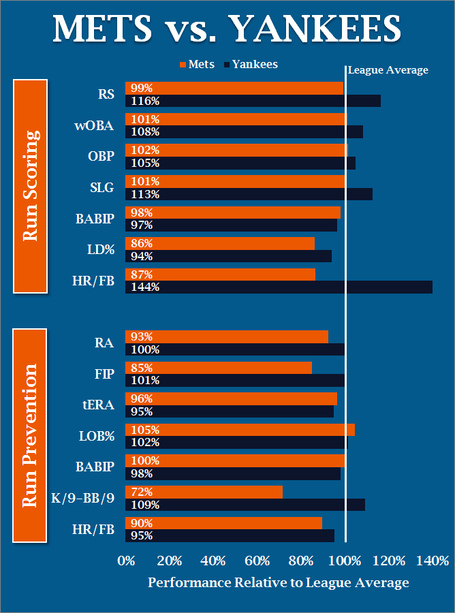 After sweeping the Nationals with back-to-back shutouts, the Mets (21-22, 5GB in NL East) travel to the Bronx for a three-game series with the Yankees (23-19, 1GB in AL East).

Offensively, the Yankees have been the superior team thus far. They are scoring about one run more per game than the Mets (5.11 to 4.13). Granted, it's in the higher run scoring environment of the AL, but the Mets are just about NL average while the Yankees are 16% better than the average AL offense. And, um, yeah, the Yankees hit a lot of home runs. The AL average team has a HR/FB ratio of 8.7% this year. The Yankees? 15.6%, 44% greater than average. They sport a below average BABIP, but given the relative league-wide decline, .275 is only 3% off league average.

Pitching-wise, the Yankees have been about league average to start the season.

That's hard to imagine given that the starting rotation has boasted the likes of Freddy Garcia and Bartolo Colon, but these long-in-the-tooth pitchers have thrown pretty well in the early going. One thing in particular the Yankees have been better at is keep runners off-base and keep balls out of play. The Yankees sport a K/9-BB/9 of 3.7, 9% better than AL average (3.38), while the Mets are at 3.2 for the year, 27% off the NL Average (4.08). The numbers are bit skewed by playing in different leagues, but the Yankees do hold the edge in K/9 (7.15 to 6.8) and BB/9 (3.42 to 3.62).

In all likelihood, this series comes down to the Mets' pitchers ability to limit home runs on fly balls. Generally, they've been pretty good this year (10% below league average), however the Yankees offense has lived off of the long ball. The Yankees have actually had the same success with their HR/FB ratio regardless of whether they were playing at home or away (which I would not have thought). Meanwhile, Mets' pitchers go from a dominant 7.5% to 12.2% on the road.

And that's what worries me most about this series.