Let's Go to the Audiotape: The Matt Franco Game

Share All sharing options for: Let's Go to the Audiotape: The Matt Franco Game 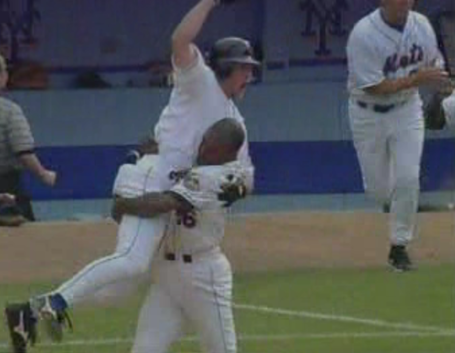 Earlier today, I visited the Daily News website and viewed their slideshow on the history of the Subway Series. (It's part of their sports pages' increasingly tiny section of non-WAG-related content.) Imagine my horror when I saw not a single image from what was possibly the greatest regular season Subway Series game ever: July 10, 1999, aka The Matt Franco Game.

Let me set the scene for you whippersnappers too young to recall it. Picture Shea on a beautiful summer afternoon, not a cloud in the sky. Rick Reed opposed Andy Pettitte, but neither starter hung around for too long in this slugfest. The Yankees were up 2-0 after the first half-inning, but the Mets rallied to first tie the game, then go ahead 4-2. The Yankees responded by tying the contest again, then took a 6-4 lead. Mike Piazza gave the Mets a brief lead in the bottom of the seventh with a monstrous home run off of Ramiro Mendoza that landed in the parking lot beyond the picnic area, traveling an estimated 482 feet (!).

Unfortunately, the Yankees came right back with a two-run homer in the top of the eighth from Jorge Posada, his second of the day, and one of six longballs the Yankees hit that afternoon. Mike Stanton stifled the Mets in the bottom half, which set yet another save opportunity for Mariano Rivera in the ninth. With one out, Rickey Henderson--one of the few people who could work a walk against Rivera--did so, and Edgardo Alfonzo followed with a long fly ball to centerfield that Bernie Williams misplayed (not charged an error, though it certainly could have been), which put the tying and winning runs in scoring position.

First base was open, but with Mike Piazza looming on deck, the Yankees opted to take their chances with John Olerud. He smashed a hard grounder right to Tino Martinez at first, forcing the runners to freeze and bringing the Mets down to their last out. Piazza was intentionally walked to bring up Melvin Mora (enjoying a brief call-up to the majors), but Bobby Valentine opted to send up his best pinch hitter, Matt Franco, instead.

Franco took the first pitch for a strike, swung wildly at the second, and then took the third for a ball--a pitch very close to the knees, one that wouldn't have shocked anyone to be called as a strike. Given a reprieve, Franco lined Rivera's next pitch into right field for a single. Henderson scored easily, and Alfonzo came around from second, beating a relay throw from Paul O'Neill to the plate, and giving the Mets a dramatic 9-8 win.

Coming on the heels of another great Subway Series game, in which the Mets beat Roger Clemens for the second time that year, Dave Anderson of The New York Times called it "The Greatest 24 Hours in Mets' History". Granted, this arbitrary designation can only be placed here because the last two victories of the 1969 and 1986 World Series took place during a time period longer than one day. Even so, Anderson was not far off when he wrote:

If it had been a World Series game, it would deserve to be put in a time capsule for as long the Yankees and the Mets play baseball. Or for as long as anybody plays baseball.

Even as a regular-season subway series game, it deserved to have had red, white and blue bunting on the box seat railings. Of the 11 games the Yankees and the Mets have played now over their three seasons of interleague confrontations, this was the best. By far. By any definition of what baseball is all about.

To correct the Daily News' glaring oversight, I present to you some audio from the ninth inning of this game. Fair warning: this is actually from the Yankees' radio broadcast, which means it contains both John Sterling and Michael Kay. Trust me, I would have used the Gary Cohen/Bob Murphy call if I had it, but this is all I have access to. However, this game was so bonkers, it manages to transcend the play-by-play team. In fact, Sterling and Kay themselves sound blown away by what they are witnessing, and even though their team lost, fully admit they've just called one of the craziest, most exhilarating games either one of them had ever witnessed.