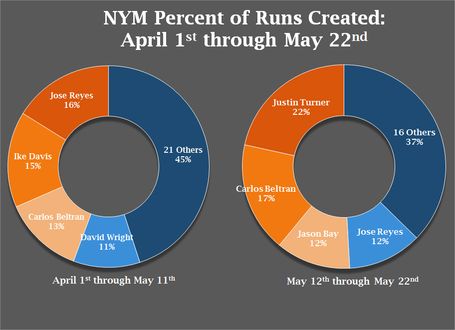 Through May 11th, the Mets had scored 148 runs (4.1 R/G). On May 12th, Ike Davis landed on the disabled list, followed by David Wright on May 17th (his last game played was May 15th). At that point, roughly 26% of the Mets offense was yanked from the lineup. Understandably, most braced for what should have been a rough couple of weeks until Wright and Davis got healthy.

The Mets have scored less since May 12th (30 runs over 10 games), but they've managed to hold down the fort going 5-5. A big reason, at least offensively, has been Justin Turner.

The graphic above shows the percentage of runs created* by individual players before and after May 11th. Prior to May 12th, the Mets offense was driven by Jose Reyes, Ike Davis, Carlos Beltran, and David Wright. After May 12th, the distribution looks a lot different.

Jason Bay returned to the line up and, while not lighting it up, has given the Mets a bit of a boost with 12% of all runs created. Reyes has cooled off a bit, but still contributing in double digits. Beltran is, well, Beltran. The biggest contributor has been Justin Turner. He's managed a .350/.395/.575 triple slash since starting everyday and has done more than any other replacement player to prop up the Mets offense in the absence of Wright and Davis.

Granted, we are talking about a small number of games, but the Mets have managed to pick up two games on the Phillies over those 10 games. More importantly, they haven't collapsed. Yes, the pitching and defense has picked it up over the past 10 games (3.9 R/G vs. 4.36 R/G previously), but without the contribution of Turner it's doubtful the Mets manage to split their last 10.

*I used a rough estimate of runs created. It wouldn't pass peer review, but it's close enough.