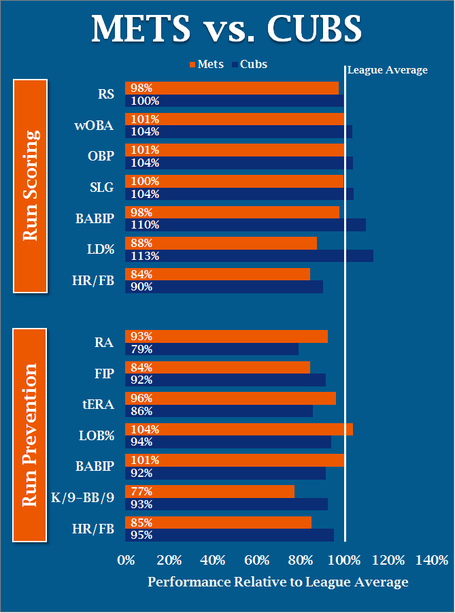 Tonight, the Mets (22-24, 6.5 GB) start a three-game road series against the Chicago Cubs (20-25, 7GB). The Mets are coming off a one for three performance against the cross-town Yankees. Similarly, the Cubs dropped two of three to the Red Sox over the weekend.

Well, well. What do we have here? A team whose pitching might be worse than the Mets? To some extent, yes. The Cubs staff has given up a ton of runs (226), third worst in all of baseball. The Mets staff has put up a better tERA and has done a good job of stranding runners. However, the Cubs do a better job of controlling those parts of the game they can (K's, BB's, HR's). This series the Mets will send surging Jon Neise, Dillon Gee, and R.A. Dickey to the hill. The Cubs counter with Ryan Dempster, Casey Coleman, and Doug Davis.

Offensively, the Cubs have been a bit better than the Mets. Although runs scored, wOBA, etc, are pretty much even, the Cubs have hit a lot more line drives and home runs per fly ball. Part of the reason the Cubs haven't scored that many more runs than the Mets is that New York has capitalized more with the long ball.

The Mets are first in the league in terms of their percent of home runs hit with men on base (51%). The Cubs rank twelfth (39%). As a result, the Mets have derived 6% more of their runs via home runs than the Cubs.

This also means the Cubs are finding more ways to score than the Mets. The Mets are only hitting 6.6% of their fly balls for home runs on the road this year, but the Cubs staff has a HR/FB of 11% at home.