Ranking the Mets on Fangraphs' Ultimate Base Running

Share All sharing options for: Ranking the Mets on Fangraphs' Ultimate Base Running

Fangraphs has released a new baserunning metric, which they're calling Ultimate Base Running or UBR, for short. The number basically breaks down how a baserunner compares to average in situations on which he can advance on the basepaths. UBR does not incorporate stolen bases or times a runner is caught stealing to paint a picture of how a baserunner performs in other situations.

The data for UBR goes back to 2002, and Fangraphs will include the figure its in WAR calculations as far back as it's possible to do so. If you're looking for a UBR column in any one of Fangraphs' sortable statistical pages, you won't see it because it's shown as "Bsr" and can be seen to the left of WAR.

As a team, the Mets rank eighth in baseball so far in the 2011 season at 2.4. Perhaps they really are playing the game the right way. The Arizona Diamondbacks lead the pack at 5.8, and the Chicago Cubs rank dead last at -7.7. Of the four most prolific offenses in baseball, the Cincinnati Reds and Cleveland Indians are both ahead of the Mets, but the St. Louis Cardinals and New York Yankees have both been negatives on the bases.

Let's have a look at the Mets' top and bottom baserunners according to UBR from 2002 through 2011: 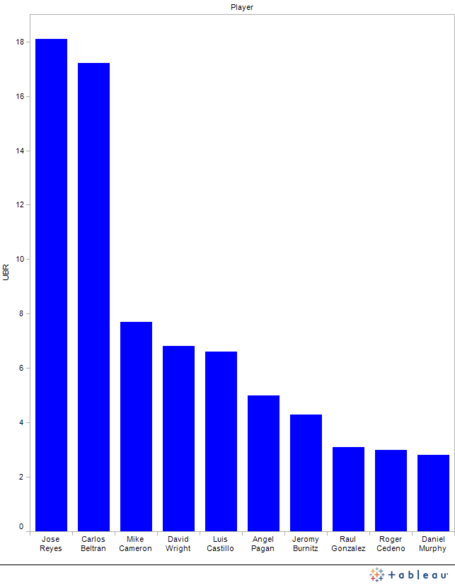 It comes as no surprise that Jose Reyes, Carlos Beltran, and David Wright, the team's best three players for several years, have been excellent running the bases. Angel Pagan and Daniel Murphy are the other two current members of the team who make the top ten cut. Though he lacked plenty of other skills, Luis Castillo remained adept at running the bases in his time with the Mets, even if he wasn't as fast as he used to be.

And now, the bottom ten baserunners over the same period of time: 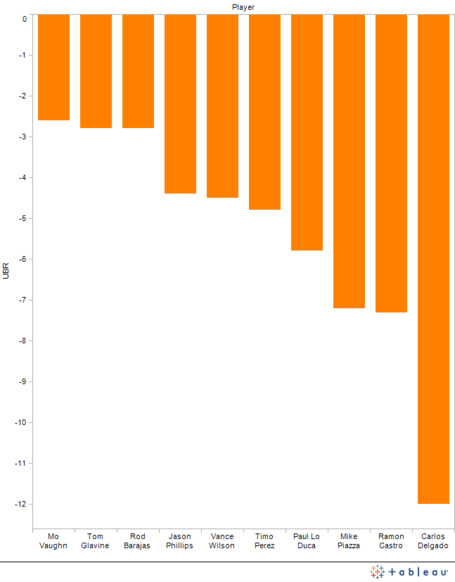 Tom Glavine! On top of throwing one of the most infamous regular season games in team history, Glavine apparently couldn't get out of his own way running the bases. Other than him, there are plenty of catchers here, which doesn't really come as a surprise. What is surprising is just how awful Carlos Delgado was on the bases.