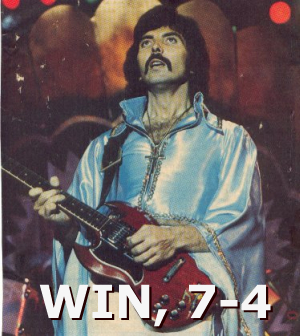 After two losses in the Bronx, the Fred Wilpon fiasco, and the stinker of a game last night, the Mets would have taken a win any way they could get it tonight. They took the lead in the top of the first inning after Carlos drew a walk with two outs and nobody on base. After Jason Bay singled, Daniel Murphy singled Beltran in to score the first run of the game, but the scoring ended there.

Dillon Gee is not the type of pitcher who can afford to issue free passes to opposing batters, but that's what he did against Kosuke Fukudome, the first batter he faced. With two outs, the inning started to get ugly when Gee allowed another walk to load the bases. A pair of doubles by Reed Johnson and Alfonso Soriano scored two runs a piece, and the Cubs had answered and surpassed the Mets' scoring from the top of the inning.

Not to be outdone by the Cubs' walks-and-runs frenzy, the Mets came right back in the top of the second. Jason Pridie and Ruben Tejada singled to begin the inning, but Dillon Gee put down a poor bunt that resulted in an easy force out at third base for the Cubs. Between his pitching in the first and his inability to lay down the bunt, Mets fans were none too pleased with Gee at that point of the game. The inning, however, was far from over.

Jose Reyes singled to load the bases, and Josh Thole followed up with a single that drove in Tejada. Carlos Beltran drilled a double to left-center field, which tied the game and probably would have given the Mets the lead if Thole hadn't face planted halfway between third and home.

Having tied things up, the Mets had runners on second and third with Gee's bunt still the only out in the inning. That ended Casey Coleman's night, and the Cubs turned to reliever Justin Berg. Berg walked Reyes on four pitches to reload the bases, walked Murphy on four pitches to give the Mets the go-ahead run, and walked Justin Turner on four pitches to put the Mets up 6-4. As Berg was walking off the mound, just before SNY cut to commercial, Keith Hernandez's frustration with the game was summed up all in one word: "Jesus." The Cubs turned to James Russell, who struck out Pridie and Tejada to end the inning and hold the Mets to a two-run lead.

The next few innings went fairly quickly, and the Mets added an insurance run in the fifth on bases loaded sacrifice fly by Dillon Gee. That was only the first out in the inning, but that was also the only runs the Mets were able to bring home. Luckily, the bad weather in Chicago took a turn for the worse, and the umpires called for a rain delay in the top of the seventh inning. The rain quickly ended the game, and the Mets had their victory.

With the help of the rain, Dillon Gee will get credit for a complete game despite the fact that his start was far from encouraging. He deserves credit for holding the lead once the Mets went ahead in the second inning, but the scoreless innings were more of a surprise than the four-run first inning.

Although the Cubs gave the game away in the second inning, it was solely the Mets' hitters who produced the first three runs of the innings and made the Cubs go to the bullpen. Only one of the twelve consecutive balls thrown by Berg was even a borderline strike, and each of the three batters who walked would have been nuts to swing the bat.

Weather permitting, the teams are scheduled to play the rubber game of the series tomorrow afternoon at 2:05 pm. R.A. Dickey gets the start for the Mets, and Carlos Zambrano starts for the Cubbies. 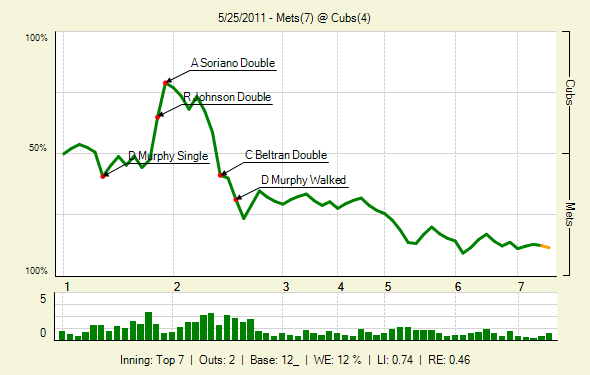