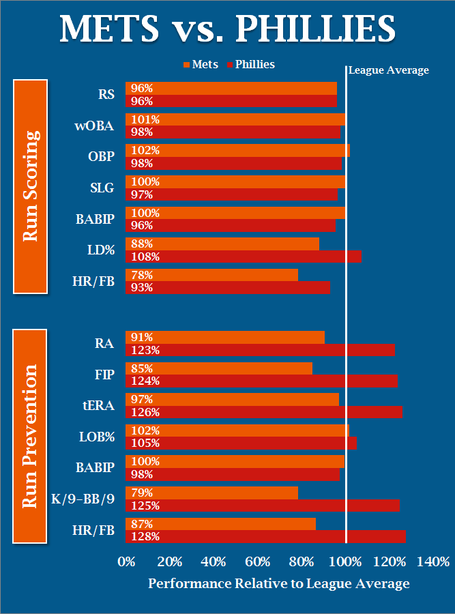 Tonight, your New York Mets (23-26, 7.5GB) begin a three-game series against the NL East rival Philadelphia Philies (31-19, 0GB). Over their last ten games the Mets have managed a record of 5-5 while Phillies have been only slightly better at 6-4. That being said, these clearly aren't two evenly matched teams right now.

The semi-good news first. The Mets have essentially been the Phillies' equal in terms of offense*. Both teams are scoring at just about league-average rate (the Phils hold a 204-191 run scored edge). The Phillies do hold an edge in terms of HR/FB ratio, but overall they are still down relative to the league. The odd thing is that the Phils sport a low BABIP, but they are hitting line drives on 20.1% of balls in play. The Phils should be closer to .320, while the Mets should be closer to .284.

At the end of the day, of course, the difference between these two teams comes down to pitching.

The Phillies' staff is performing as well as many expected. They are leaps and bounds better than league average almost every category, including the all important runs against area. They've also done a great job keeping fly balls in the park (6.8% HR/FB). Met's pitchers have done a much better job of keeping fly balls in the park at home, but other than that there aren't many positives to point to here.

As much as I hate to admit it, the Mets might be luck to grab one out of three this weekend.

*For some reason FanGraphs hasn't updated their data to reflect last night's game, but the averages won't change all that much.