Share All sharing options for: Phillies 6, Mets 4: Bullpen Melts Down After Capuano's Gem 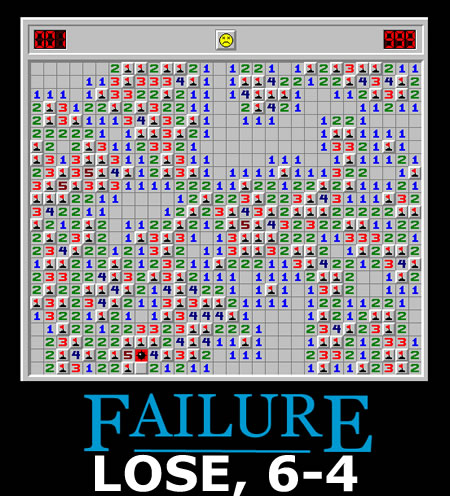 Before the game took a sharp turn for the worse, Chris Capuano had his best start as a Met. He stuck out the first four Phillies he faced and needed only 78 pitches to get through 6 innings. In total, he struck out 8, walked only 1, and allowed 2 runs, one of which was unearned.

The first run Capuano allowed came in the third inning and was largely the result of the walk he issued to Carlos Ruiz to begin the inning. After he was sacrificed to second base by Roy Oswalt, Ruiz scored on a two-out single by Jimmy Rollins. Capuano kept the Phillies off the board for the rest of the inning and through the fourth.

In the fifth inning, however, the Mets decided to give the Phillies a boost. John Mayberry led off with a bloop single to center field, which should have been a lot more harmless than it was. Angel Pagan committed an error when he overran the ball as it landed several feet in front of him, and Jason Bay picked it up and committed a throwing error which allowed Mayberry to advance easily to third. Daniel Murphy hadn't been backing up and made an ill-advised throw that was luckily stopped by Justin Turner at third.

Roy Oswalt was up next, and of course, he singled to plate Mayberry and put the Phillies up 2-0. Turner made a phenomenal play on sharp ground ball down the third base line which undoubtedly helped keep the Phillies off the board for the rest of the inning.

The Mets finally got a run across the plate in the bottom of the inning after they had two outs and nobody on base. Jose Reyes popped up to shallow center field, and Chase Utley and Jimmy Rollins ran into each other, Utley dropping the ball as he slammed into Rollins. Turner and Carlos Beltran followed up with consecutive singles, the latter scoring Reyes and cutting the Phillies' lead in half. Jason Bay stepped up to the plate for the billionth time with a chance to get a big hit, but he predictably struck out to end the inning. I'm not sure Bay will ever hit as a Met.

So the game went to the sixth, and Capuano threw an easy scoreless inning. The Mets tied it up in the bottom of the inning, getting started on a one-out single and stolen base by Angel Pagan. Ronny Paulino singled to left field, and Chip Hale sent Pagan home because Raul Ibanez sucks at defense. His throw was laughable, Pagan scored easily, and the game was tied at 2. But then things went horribly, horribly wrong.

Ruben Tejada popped up, and with two outs and a slow runner on second base, Terry Collins pinch hit for Cruisin' Chris Capuano with Willle Harris. Willie freakin' Harris. He of the .230/.323/.322 slash line entering the game. The move just might have been the single worst managerial decision Collins has made thus far in the season, and the gamethread went insane when it happened. Oh and Harris grounded out weakly to end the inning, so it failed miserably.

Pedro Beato bounced back from a couple of rough outings to pitch a scoreless seventh inning, and for a few moments in the bottom of the inning, it looked like Terry's decision would go unnoticed. Reyes started the inning with a double to left field, and Phillies reliever Mike Stutes executed a pickoff play all by himself, throwing into center field as nobody was covering the bag. Reyes' reaction was delayed, but he still made it to third easily. Turner singled to give the Mets the lead, and Citi Field went wild. Turner then attempted to steal second base but was thrown out, and the Mets didn't score again in the inning.

Jason Isringhausen pitched a rocky eighth inning, allowing a single to Dominic Brown to start the inning. Brown then stole second base, even though he could have easily been thrown out had Ronny Paulino's throw been anywhere near second base. Rollins then doubled down the first base line to tie the game, but Izzy danced through the rest of the inning to keep the game tied.

The one enjoyable part of the eighth inning for Mets fans was Ruben Tejada's 16-pitch plate appearance that drew a walk with two outs in the inning. Pinch hitter Scott Hairston couldn't make anything of it, though, so the game remained tied.

Then came the ninth inning, and what a brutal inning it was. Francisco Rodriguez came on to pitch and recorded a quick out, but it was all downhill from there. Carlos Ruiz and pinch-hitter Ross Gload singled, and Dominic Brown hit a grounder towards first base, but Murphy botched what should have been an easy out, allowing the go-ahead run to score. Rollins followed up with a sacrifice fly, and after a single by Utley, Polanco chopped one up the middle to score the Phillies' third run of the inning. Ruben Tejada fielded the ball but went to second base with it and didn't get the out. The only upside in the inning was that Rodriguez was pulled after the play, preventing him from racking up yet another Game Finished.

What would a Mets' deficit in the ninth inning be without a tease? Reyes singled off Ryan Madson, Turner lined out, and then Reyes moved to second on defensive indifference. Beltran singled to score Reyes, and Bay managed to get his first hit of the game to put runners at the corners with only one out. But Daniel Murphy grounded into an easy double play, and the game was over.

Unintentionally sexual quote of the game: "Isringhausen gives up the tying run but stiffens from there." - Gary Cohen 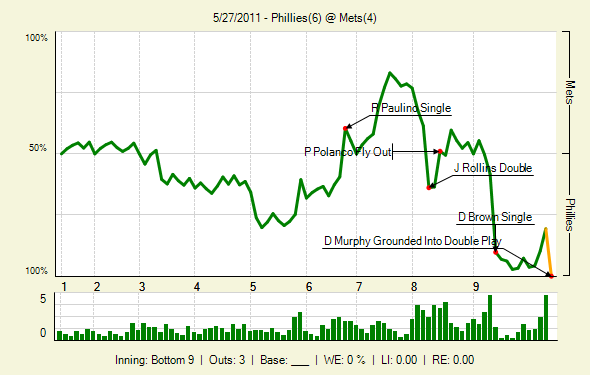