This Week In SNY, Featuring Spiders, Tim McCarver, And An Obese Phillies Mascot

Share All sharing options for: This Week In SNY, Featuring Spiders, Tim McCarver, And An Obese Phillies Mascot

This week's edition is a bit late and includes Sunday night's festivities. Away we go: 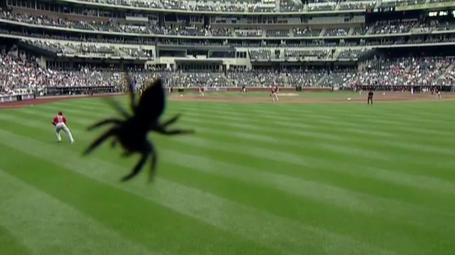 It's BJ the giant spider, from BJ's Clubhouse!

SNY anchor Gary Apple is FIRED UP about some NFL players working out: 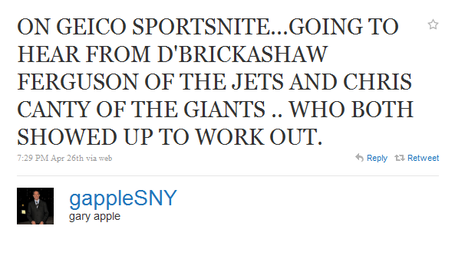 Kevin Burkhardt is apparently unfamiliar with the butterfly effect. He tweeted the following after Daniel Murphy's game-tying home run against the Nationals last Wednesday, which followed that terrible call on Jose Reyes at third base. This is one of our pet peeves in baseball commentary:

A butterfly flaps its wings in China and... Yadier Molina isn't conceived? 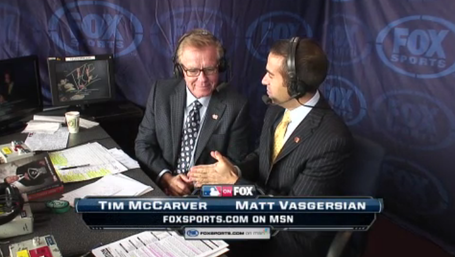 McCarver is now 69 years-old, so while his Grandpa Simpson-esque monologues and forgetfulness are annoying, they're also somewhat forgivable. They're still fun to highlight. Here is McCarver ranting about pitch counts, which was sparked by Ken Rosenthal discussing Roy Halladay's workload in 2010 and an all-time great "unintentionally sexual quote of the game" from Matt Vasgersian:

Matt Vasgersian: I would imagine, Tim, that it would be impossible not to have a stretch in a 162 game season where a starter could use a blow.

Tim McCarver: It's not the fact that pitch counts are not important. It's where they are in importance. I mean it's gotten to the point in baseball, and it's trickled down in little league. When a young man comes home, the mother or father says, "Johnny, how was your pitch count today?" It used to be "Johnny, did you win today?" That's all that mattered. And now it's "Johnny, were you economical with your pitches?" I mean, it's ridiculous! The importance is not nearly as great as we in the game -- the media in the game -- purport it to be. Winning is still the biggest thing! And there are people that are overwhelming the game with this pitch count, and I think it's ridiculous. Throw away the clicker, and win or lose. That's my thinking on that.

You hear that? If little Johnny isn't throwing curveballs and hurling 130-pitch complete games by age 11 then he's a loser!

Modern folklore indicates that McCarver once referred to Ryota Igarashi as "Toyota Irrigation". On Saturday, he provided analysis on the following mysterious Mets:

McCarver relayed a story from Terry Collins about Andre Ethier that seems far-fetched:

Terry Collins told us a story before the game today. When he was the [Dodgers] minor league director in 2006, a young outfielder the Dodgers had signed off the campus of Arizona State came up to him and said "I want to quit". That outfielder was Andre Ethier. Terry talked to him, he said "Andre, you can do that, but you're making a mistake. You have talent to reach the big leagues." And he talked him into continuing his career. And here he is, has he ever had a good career.

It is true that Collins worked in player development for the Dodgers and Ethier started 2006 for the Dodgers' Triple-A team. But Ethier wasn't signed by the Dodgers out of Arizona State -- he was acquired via trade from the Oakland A's during the 2005-2006 offseason. Moreover, Ethier had a fine 2005 season for the A's Double-AA team: .319/.385/.497 with 18 home runs. He was the A's Organizational Player Of The Year. He raked in college and the minors. This wasn't some talent-deficient scrub desperately trying to make it to the bigs. Perhaps Ethier wanted to quit for some other reason. But given his track record and hot start at Triple-A in 2006, this seems like a tall tale.

Here is the Phillie Phanatic demonstrating the Philadelphia Dance Of Seduction:

That's it for this installment. Send any tips or suggestions to ThisWeekInSNY@gmail.com.