Share All sharing options for: Giants 7, Mets 6: Mets Lose a Heartbreaker in Extras

For the second straight game, the Mets went to extra innings. It didn't take long for the game to end after that, but things had started very well for the Mets as R.A. Dickey set the Giants down in order in the first inning. Carlos Beltran hit a three-run home run in the bottom of the inning, and the Mets had an early lead with which to work.

That didn't last. R.A. Dickey had a rough third inning, allowing four runs to score on a leadoff walk and a series of singles, only one of which was of the bloop variety. Dickey's knuckleball wasn't moving very much that inning, and the Giants' runs confirm its ineffectiveness.

It was still early in the game, though, and Ike Davis answered in the bottom of the third with a two-run bomb into the bullpen to retake the lead at 5-4. Not to be outdone, the Giants tied the game with a run in the top of the fifth on what could have been a series of outs but turned into a run and could have been more. They regained the lead in the sixth on a solo home run off the bat of Nate Schierholtz, and keeping with the theme of the game, the Mets tied it up in the bottom of the frame on a Jose Reyes single.

The game remained tied through the ninth inning, an inning in which the Mets had a fantastic opportunity to win the game and send everyone home happy but failed. David Wright unsurprisingly hit a double to lead off the inning against a lefty, and the Giants intentionally walked Beltran. Davis grounded out, advancing both runners, and the Giants chose to intentionally walk Willie Harris, too, to bring Josh Thole to the plate with the bases loaded and one out. Thole proceeded to ground into a 1-2-3 double play, and the game went to extras.

It didn't take long for the game to end from there. Aubrey Huff blasted a solo home run to begin the tenth and put the Giants up 7-6, and that was all the Giants needed to win the game. Jose Reyes was the only Met to reach base in the bottom of the inning.

R.A. Dickey's outing was definitely not one of his best, and the one awful inning was a huge part of the loss. On the upside, Jose Reyes reached based in all six of his plate appearances, a rare feat for any baseball player. Perhaps Sandy Alderson will now sign him through 2035 or something. 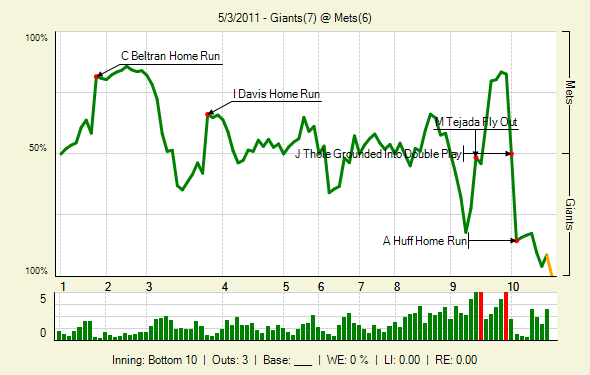