What's the Deal with Jason Bay?

Share All sharing options for: What's the Deal with Jason Bay?

When the Mets signed Jason Bay in the winter between the 2009 and 2010 seasons, a lot of noise was justifiably made about the number of years and dollars Omar Minaya committed to a power hitter on the wrong side of 30. The main concern was that Bay would be vastly overpaid during the fourth guaranteed year of his deal and even more so during his easily-attained-vesting-option fifth year of the deal. Nobody thought he'd be a complete disappointment at the beginning of the deal.

How bad has Bay been since putting on a Mets uniform? In 2010, his .336 wOBA over 401 plate appearances was poor by his standards, and so far in 2011, his .297 wOBA is poor by an average outfielder's standards. Let's have a look at what might be different for Bay since his arrival in Queens to see if there are any explanations for his miserable production.

One of the knocks on Bay when he left Boston was that he struck out a whole lot, but his strikeout rate with the Mets has been in line with his career norm. In fact, he struck out most frequently in 2009, the second-best year of his career judging by wOBA. His walk rate, too, looks very similar to his career mark.

Let's have a look at his batted ball data to see what's there: 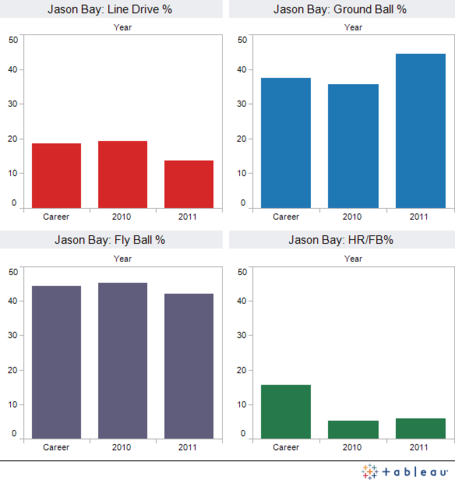 Although the 2011 numbers look stark, the season is still young. As a Met overall, Bay's hitting the ball fairly closely to his norms. If the line drive and fly ball drops and the corresponding rise in ground balls continue, that'll be a major issue. What jumps out is the major drop in the percentage of Bay's fly balls that are going over the fence, about one-third as many as before.

Here's what Bay has done on fly balls the past four years: 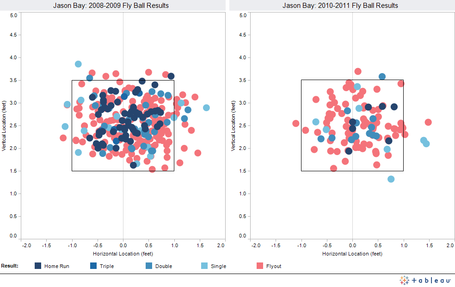 Ouch. When Bay hit a ball in the air in the past, it usually produced very good results. In terms of quantity, he's had far fewer opportunities with the Mets, but he's only hit one home run on a pitch on the inner half of the strike zone. That's something he used to do regularly, as he homered frequently on high-and-inside and middle-to-low-inside pitches. If he's not hitting balls on the inner half out of the park, you can bet opposing pitchers won't be afraid to throw there.

Fly balls haven't been the only source of Bay's success in the past, though. The lack of home runs certainly plays into his dreadfully low ISO since joining the Mets, but why else might he be struggling to hit for extra bases? Well, swinging at pitches outside of the strike zone isn't going to help. Let's have a look: 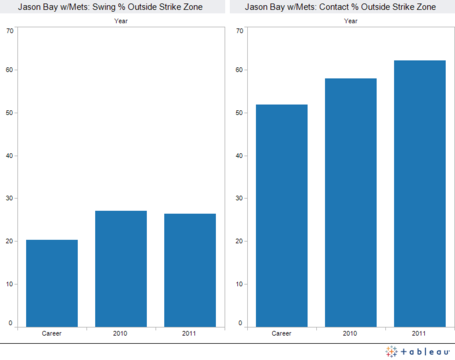 As you might expect, swinging at more pitches out of the zone has resulted in making more contact out of the zone. Obviously, it's harder to hit those pitches than the meatballs. And here's what's happened on those swings: 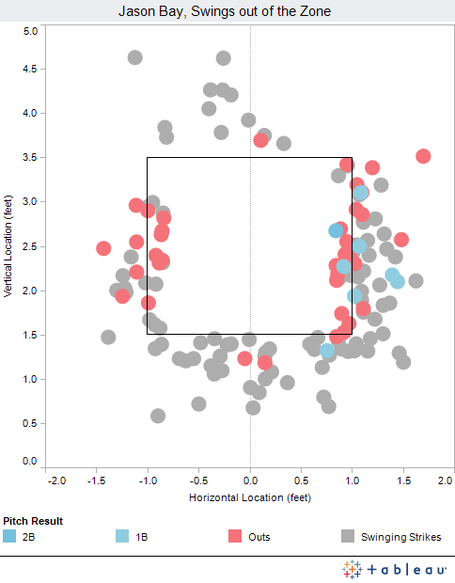 That's a whole lot of nothing. Despite the fact that he's still drawn walks, Bay's done himself a disservice by swinging at so many of these pitches.

Over the course of his career, Jason Bay has feasted upon the fastball. He's seen it 57.4% of the time at the plate, and most of the time, he has clobbered the pitch. 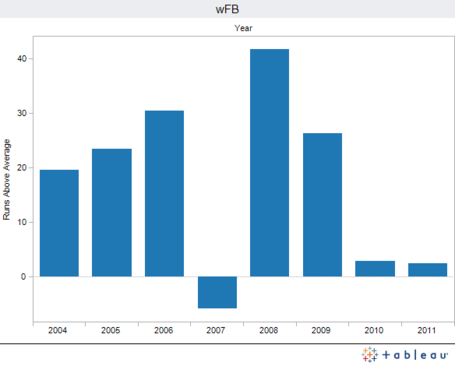 Well, most of the time except his down year in 2007 and his time with the Mets. The numbers above are Bay's Runs Above Average against the pitch according to Fangraphs, which is a counting stat so the 2011 figure is still a work in progress. If he stays on his current pace, which is unpredictable at this point, it'll look better than 2010 but nowhere near as good as past years.

So let's have a look at what Bay's done to fastballs: 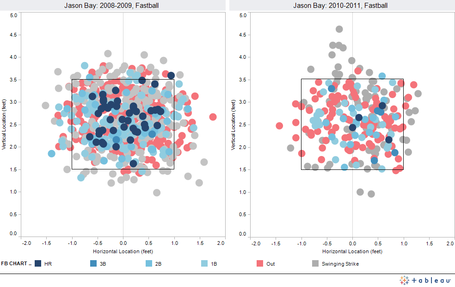 The data above only shows the fastballs on which Bay either swung and missed or put the ball in play. He looked at a whole bunch of balls and strikes, got hit by a few pitches, and fouled off a bunch of them, but what he's done in the instances shown above seems the most important.

In 2008-2009, Bay hit 45 home runs against the fastball, but he's only hit 4 in a Mets uniform. The swinging strikes don't look disproportional, and that's reflected in his aforementioned strikeout rate. The big difference here is that most of the fastballs he's made contact with have been outs. Very few of them have been hit for power.

On the upside, it's entirely possible for Bay to stop swinging at pitches outside the strike zone as much as he has been of late. Any improvement there should result in an overall improvement in his production.

On the downside, there's no telling whether his power outage on fly balls in general and against the fastball specifically will turn around.

All PitchF/X data is from Joe Lefkowitz's site. All other data is from Fangraphs. Data for 2011 includes games through May 27.