Pirates 5, Mets 1: This Team Is Clearly Just Messing With Me at This Point

Share All sharing options for: Pirates 5, Mets 1: This Team Is Clearly Just Messing With Me at This Point 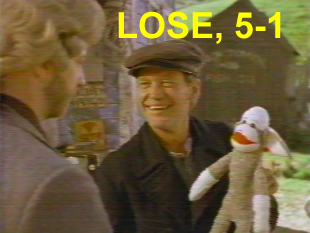 When this game began, the Pirates had yet to win at CitiField and the Mets had not hit a home run in 9 straight home games. Guess which streak ended?

R.A. Dickey looked a tiny bit tentative early in the game; Ron Darling compared his delivery to that of a pitcher still warming up. Leadoff batter Jose Tabata snuck a double down the first base line, which immediately put him in danger. Dickey dug deep and retired the next three batters to strand Tabata. He had little trouble from that moment on. Wicked movement on his knuckleball made mincemeat of an impatient Pittsburgh lineup. Normally a fly ball pitcher, Dickey struck out a career-high 10 batters, and got an unusual amount of groundball outs; the first outfield putout did not come until the top of the seventh.

Dickey retired eight in a row after Tabata's double, before a two-out walk and single in the top of the fourth. He proceeded to strike out Andrew McCutchen (who looked utterly lost flailing at Dickey's kunckler all night) and set down another 13 in a row. His performance was all the more impressive considering the state of his ailing heel, which was evident each time he had to run out a groundout or trot off the mound.

Pirates starter James McDonald pitched admirably as well. Though a considerably harder thrower, the Mets batters fared only slightly better against him than the Pirates did against Dickey. However, he gave up his own leadoff double to Angel Pagan, and he came around to score on a dribbler off the bat of Jason Bay that would have traveled farther if it was kicked.

The Mets clung to the 1-0 lead until the top of the eighth, and it looked like this might actually be a tidy, two-hour-plus, Mark Buehrle-essque affair until Ronny Cedeno hit a leadoff single. Dickey nearly escaped unscathed thanks to a popped up bunt and a strikeout, but a hit batsman and a Josh Harrison single conspired to tie the game.

Terry Collins obviously wanted to give Dickey a chance to escape further damage and still earn a win, but actually winning the game took a backseat in this ill-advised plan. Granted, it probably would've taken a forklift to move Dickey from the mound he was so determined. Regardless, the clearly gassed Dickey walked the formerly befuddled McCutchen, and Neil Walker laced a single up the middle to plate two runs.

Jason Isringhausen got the last out in the eighth, but Bobby Parnell picked up right where he left off when he hit the DL, loading the bases and allowing a two-run bloop single in the top of the ninth. Not that Parnell's typical levels of suck made much of a difference. The Mets batters looked just as listless in the eighth and ninth as they had all game, and went down in order. I was surprised I didn't see anyone actually take a nap at home plate, since that's essentially what they all did.

The loss not only drops my recapping record to 1-9--each loss more unlikely and soul-crushing than the last--but also robs me of a chance to make an "It's Dickey!" headline with an accompanying Run-DMC image. I hope you're happy, Collins. 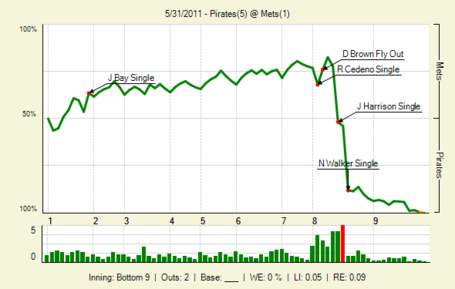