You Know, The Mets' Offense Isn't Half Bad

Share All sharing options for: You Know, The Mets' Offense Isn't Half Bad 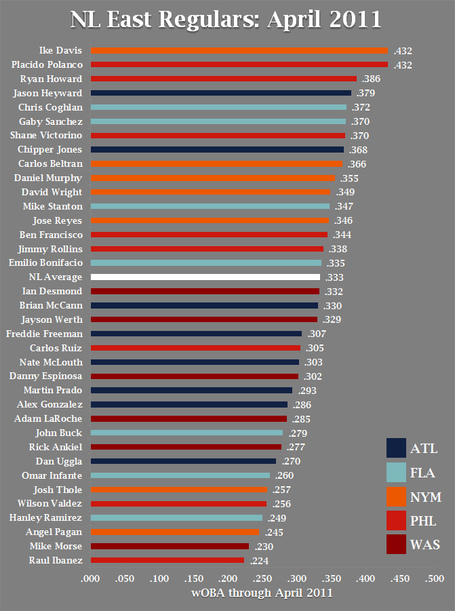 Ever since Sandy Alderson and company took residence in the Mets' front office people have questioned their strategy of passing on free-agent position players. The claim was that the Mets' anemic offenses of the past few years where largely the result of very talented players wasting away on the disabled list. With many of these players healthy and playing for a full season, the offense should naturally rebound without the help of pricey free-agents.

So how's that strategy working out for the Mets? Pretty good, actually. Through April, the Mets have managed to score the 12th most runs in all of baseball and 7th most in the NL--scoring only two fewer runs than the Phillies.

The visual above lists all regular position players in the NL East (>=60 plate appearances) and their weighted on-base average (wOBA) through April. The bars are color coded relative to the player's team. When you look at it this way it's pretty clear that Met position players stacked up pretty well against their NL East counterparts during the first month. Next to the Phillies, the Mets have the most position players with above average wOBA's within the division.

The problem so far this year was ironically the team's greatest strength last year--pitching.

Last year, the Mets staff posted a fantastic 652 runs against, 8th best in baseball and 6th best in the NL. This year, the pitching has been the achilles heel, giving up the 8th most runs in baseball.

Even with the spector of John Santana returning to the mound it's pretty hard to imagine this rotation being anything other than average this year. Big Pelf seems to be back to his inconsistent ways. RA Dickey has come down from his career year last year and isn't likely to improve all that much. And while Chris Young has shown an uncanny ability to flumox hitters with an 83 mph fastball we really can't expect him to continue to limit oppossing hitters to a .163 batting average on balls in play.

In the grand scheme of things this may be the best scenario Met fans could have asked for (beyond, you know, being a contending team). The Mets will be able to move some of their pricey offensive players by the trade deadline, hopefully allowing them to restock on young arms. Of course, I don't know who would have predicted that last year's staff would end up putting together as fine a year as they did. Maybe there is hope after all.