On Thursday afternoon, a sinker didn't sink the Mets' chances for a change.

Mike Pelfrey found himself on the right side of a 5-2 win Thursday over the San Francisco Giants with his strongest outing of the 2011 season. Relying almost exclusively on his very effective sinker, Pelfrey cruised through the early innings and retired the first eleven batters he faced in order on a meager 33 pitches. Pelf looked sharp enough to expect an easy afternoon if not an open flirtation with a no-hitter.

Then Pelfrey moved away from his bread-and-butter pitch for a four-seam fastball and immediately surrendered a solo home run to Mike Fontenot in the top of the fourth. His momentum notably slowed after Fontenot's shot as he mixed in other pitches to less than stellar results, 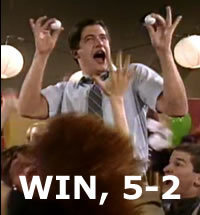 most notably by surrendering a first-pitch RBI single to Giants starter Jonathan Sanchez that brought Nate Schierholtz in to score from second base.

Despite staggering to the finish, Pelfrey worked his way out of enough trouble to pitch 7 2/3 innings, making Thursday's appearance his longest start of the season to date. Francisco Rodriguez received the call in the bottom of the eighth to earn his seventh save of the season, though K-Rod did his best to try and blow it by loading the bases in the top of the ninth before Buster Posey grounded out to short to end the game.

It likely helped that the Mets' offense exploited an erratic outing by Sanchez. Jose Reyes reinforced Pelfrey's solid start with an RBI triple off Sanchez in the bottom of the second that capped a 3-run inning. Pelfrey scored all the way from first base on Reyes's triple in as awkward a fashion as you could possibly imagine that did not result in some kind of hamstring injury. Carlos Beltran extended the lead over Sanchez and the Giants with his fifth home run of the season - a 2-run shot to left field in the bottom of the fifth that elongated Beltran's nine-game hitting streak at home.

That said, we should not discount the efficacy of Pelfrey's sinker. He called on it for a shade under 66% of his pitches, relying on it heavily on the first trip through the Giants' lineup. He induced countless groundballs along with 4 of his 5 strikeouts on the back of it. It became doubly important as Pelfrey failed to induce any swinging strikes with any other pitch except for the slider that caught Cody Ross for a fifth-inning strikeout. Pelfrey described his Thursday's outing as "effortless," and that came about as his sinker served him well all afternoon.

It's unclear how much Ronny Paulino's presence behind the plate factored in to Pelfrey's performance, but cue the speculation. Paulino can't make Pelfrey's sinker sink, but he may be more direct in making Pelfrey throw it repetitively.

Lost in all the hysteria was how the Mets failed to bump up their on-base percentage against the Giants' bullpen. No runners reached base after Bruce Bochy replaced Sanchez with Guillermo Mota in the bottom of the sixth. David Wright and Beltran were the only ones to even muster hitter's counts against the Giants' relief corps, too. Beltran's fifth-inning blast provided enough of a cushion to hide this shortcoming, but it would've been nice to see Mota not pitch two successful innings nor the illustrious Dan Runzier strike out proud papa Jason Bay.

The Mets welcome the Los Angeles Dodgers to Citi Field for a three-game series commencing tomorrow night at 7:10pm. Jon Niese will toe the rubber for the Mets against the Dodgers' Hiroki Kuroda. 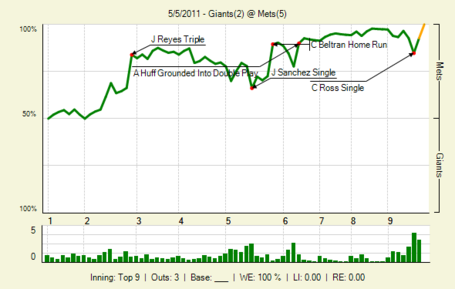