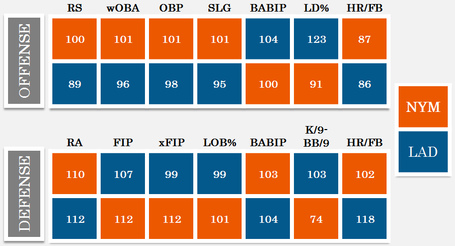 Starting tonight, the Mets will host the Los Angeles Dodgers for a three-game series. The Mets currently sit 8.5 games behind the NL East-leading Phillies with a record of 13-18, while the Dodgers find themselves only 4.5 games out of the NL West with a record of 15-17. To preview the series I decided to try something new and present a statistical comparison on both teams. The statistics are scaled so that 100 is equal to the NL League average. Higher scores are better for statistics such as wOBA and SLG, whereas lower scores are better for FIP and LOB%.

Here's how they stack up:

Statistically, the Mets' offense has performed better so far this year, settling in at league-average for most major categories (e.g. wOBA, OBP, SLG and, of course, runs scored). The Dodgers are hitting lots of line drives, but they haven't translated that into much scoring.

The Dodgers, on the other hand, have pitched better than the Mets despite letting up 12% more runs than the average NL staff. The Dodgers' K-BB is 3% better than the average NL team, while the Mets are 27% worse in this category. Not surprisingly, the Mets find their fielding independent pitching and expected fielding independent pitching 12% worse than league average.

So while the Mets have the advantage offensively, the Dodgers seem to have a larger advantage defensively given how their pitching matches up against the Mets' staff. Winning the series will likely come down to whether the Mets can take the first two before facing Clayton Kershaw in game three.